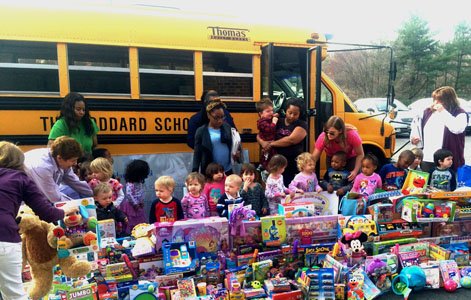 Items for the “Stuff the Bus” initiative were collected by The Goddard School preschoolers the entire month of March. On Thursday, April 3, 2014, the items were loaded in a school bus and then donated to children undergoing treatment at the Johns Hopkins Children’s Center. The Goddard School

BALTIMORE — Typically, a yellow school bus transports students. However, on Thursday, April 3, 2014 a busload full of another type of precious cargo was transported from The Goddard School, Bare Hills to Johns Hopkins Children’s Center in Baltimore.

That day, toys, books, and other donations collected by Baltimore area Goddard School preschoolers during its “Stuff the Bus” initiative, were loaded aboard the school bus headed to children undergoing treatment at the Johns Hopkins Children’s Center.

Mike Glasser, owner of The Goddard School, Bare Hills, sat in a special seat aboard the bus that transported the items. He was the bus driver.

“This donation ties into The Goddard School curriculum which includes teaching children the importance of giving back to their community in meaningful ways, while emphasizing the significance of helping others in need,” said Glasser. “Our goal was to fill the bus with toys and other items.”

He added, “The whole idea was to have all of our families as well as the outside world to drop off toys for this initiative. We really wanted to take something to the kids at the Johns Hopkins Children’s Center that was tangible and relevant.”

In support of this effort, an open house was held March 24-28, 2014 to encourage all residents in the Baltimore area to participate.

“This has been so much fun,” said Glasser. “We displayed the donations at our school, and the parents told the students what the donations were all about. The students knew they were for children who were not feeling well. Items were collected across all 16 locations of The Goddard School in the Baltimore area. We serve children, and Johns Hopkins Children’s Center serves children. It was a natural fit. We look forward to doing this again.”

The Goddard School is a preschool for children six weeks to six years old, and has more than 400 schools across the United States. All schools have an on-site owner and an educational director. The schools incorporate a learning philosophy that uses the most current, academically endorsed methods to ensure that children have fun while learning the skills they need for long-term success in school and in life.