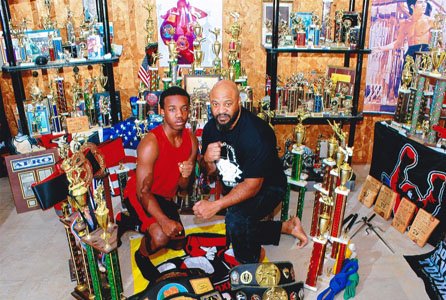 BALTIMORE — There is constant negative talk about fathers not being part of their children’s lives. There is also negative news about black males only caring about sports for the money and status. The duo of Mack Allison III and Mack Allison IV disprove both myths.

According the Mack Allison III, “Education is key in my household. I have a son and daughter who attended college. Another daughter that is set for college and my son, Mack IV, is ahead of schedule in high school as he is 16 years of age and is a junior in high school.”

Sports played an important part in the development in the early life of Mark III.

“Had I not played sports, I would be lost and in the streets. Sports helped me to focus, set goals, and helped me get through college,” said Mack III.

Mack III used to take his kids with him to Judo classes and boxing training. Little did he know that his youngest, Mack IV, was not only watching but also imitating him. “One night my wife told me she had something for me to see. As we crept up to Mack IV’s room, I saw him punching the speed bag I had tied to his bed. He was three years old.” The rest is history. Mack III would go on to mentor his son and spend a great deal of time with him, not only teaching him the sport of boxing but about life and education. “There are no sports if you don’t have good grades and attending classes” says Allison.

Mack instills the same philosophy as an instructor at the Upton Boxing Gym when he’s teaching neighborhood children and teens. “Boxing is not about being able to fight, it is about helping these kids see there is more to fighting, through education, counseling, and mentoring.”

Allison has turned his family’s success---Mack IV just won his fourth consecutive Golden Gloves tournament--into a family business called Ponytail Promotions. Their first event is scheduled for May 17, 2014 in Virginia.

To contact Mack Allison III or for more information about Upton Boxing located at 1901 Pennsylvania Ave. in Baltimore call 443-984-2588.