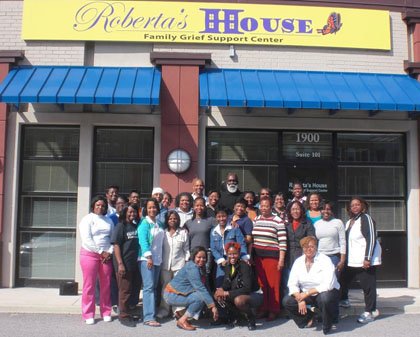 Roberta’s House is currently the only organization of its kind that provides bereavement support for the entire family. The facility offers free children and teen peer support groups, adult programs, volunteer training and community education. (Above) Volunteers at Roberta’s House after a training seminar. Courtesy photo

BALTIMORE — Left in the wake of Charm City’s staggering homicide numbers are family members who are faced with coping with the loss of a loved one all by themselves.

That’s where Annette March-Grier steps in.

“There’s a lot of fear, mistrust, anxiousness, panic attacks from family members whose lives will be changed forever,” said March-Grier, the president and executive director of Roberta’s House Grief and Loss Center, a safe place where children, teens, and adults discover that they’re not alone in their grief and where they engage in mutual help.

“The stress is emotional, physical and spiritual,” said March-Grier, who has worked tirelessly to increase the community’s knowledge of children’s grief.

March-Grier established Roberta’s House as a tribute to her mother, the late Julia Roberta March of one of the city’s more notable funeral homes, the March Funeral Homes, Inc.

The March family and March-Grier, a registered nurse and daughter of William March, recognized a greater need to extend the support services to meet the needs of a broader community, said March-Grier, who established Roberta’s House in 2007 and who has facilitated bereavement programs for nearly three decades.

“This is an opportunity for our community to support the healing of our community,” March-Grier said. “We realized that there were no resources available for children to help them to understand the process of grieving and how to work through it.”

Counseling programs offered at Roberta’s House are designed to restore children and their families to a place of wholeness and provide support as they experience grieving the death of a family member, friend or significant person, March-Grier said.

“As murders and violence increase in Baltimore, more children are being left behind,” she said. “There is a tendency not to talk to children, that they will just bounce back. There’s no discussion, no explanation and the children are often left along to figure things out like where did mom go or where did dad go?”

Those children also are often tagged with an ADHD diagnosis or other mental health issue, according to March-Grier.

“But, they need an explanation. They need support,” she said. “We encounter so much death and when people come to Roberta’s House it’s usually after multiple deaths have occurred.

“We are here to provide a confidential setting to facilitate the emotional, physical and spiritual healing for grieving children and their families where grief can be expressed and experienced safely,” March-Grier said.

Mayor Stephanie Rawlings Blake also awarded Roberta’s House a $200,000 grant toward the rebuilding of a new grief and loss center to accommodate their need and to expand the services to help more individuals and families.

“We have provided service to over 2,200 individuals, trained over 300 volunteers and we have a core group of 80 volunteers at Roberta’s House,” March-Grier said. “Our vision is, ‘Safer communities and healthy families with healthy coping skills and positive outlooks on life.’”

For more information about Roberta’s House or to make a donation, visit www.robertashouse.org.