“Stories from the work front: From working girl to CBS Sunday Morning” 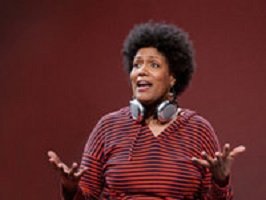 TOWSON, Md. — The College of Fine Arts and Communication and the Department of Mass Communication & Communication Studies and the Society of Professional Journalists present keynote speaker Nancy Giles, CBS Sunday Morning contributor, comedian and actress on Thursday, April 17, 2014 at 6:30 p.m. in the West Village Commons Ballroom, located off of Towsontown Boulevard in Towson on the campus of Towson University as part of #TUjday 2014. The event is free and open to the public.

CBS Sunday Morning contributor, comedian and actress Nancy Giles presents audiences with her unique blend of common sense wisdom and laugh-out-loud humor. A veteran of Chicago’s esteemed Second City improv troupe and winner of the Theater World Award for the off-Broadway musical “Mayor,” Giles appeared for three seasons on the TV drama “China Beach,” and played a secretary in the movie “Working Girl.” She has made appearances on “Law and Order,” “Spin City” and “The Fresh Prince of Bel-Air.” Her one-woman New York stage show, “Black Comedy: The Wacky Side of Racism,” is called “smart and unforgiving” by the Village Voice. An accomplished voiceover and radio artist, Giles’ credits include work for Office Depot, True Value, Tide, The New York Times, Yoplait, Avenue clothing stores, Lifetime, Food Network, ABC Daytime, “PB & J Otter” on the Disney Channel, and Nickelodeon’s “Might Bug 5.” She won back-to-back Gracies from the Alliance for Women in Media for her CBS Radio show on WPHT-AM in Philadelphia. She has offered her social and political perspectives on “The Today Show,” “The Joy Behar Show,” “Up with Chris Hayes,” and “Hardball with Chris Matthews.”

The event is free and open to the public. For additional information contact Stacy Spaulding at 410-704-2407 or sspaulding@towson.edu.