The brawl will air during the reunion show Sunday 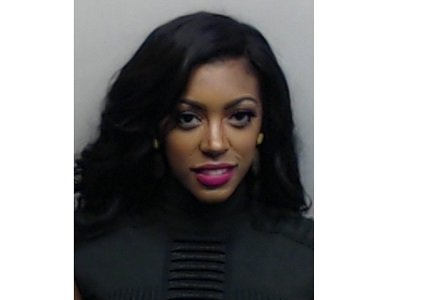 (CNN) — Well, this is going to be ratings gold.

Just in time for Sunday's "Real Housewives of Atlanta" reunion show, police served one of the show's stars, Porsha Williams, with an arrest warrant for attacking another, Kenya Moore.

Of course, the brawl was caught on film. And of course, Bravo -- which airs the show -- is not going to not air it.

Williams, 31, turned herself in to the Fulton County Sheriff's Office on Wednesday on a simple battery charge, a misdemeanor. She had her mugshot taken and was released on a $2,000 bond.

The attack took place during the taping of the show back on March 27. So why did the arrest take so long?

Well, according to a police incident report obtained by People magazine, Moore called police the day of the assault, but didn't fill out a witness statement until much later.

"Mrs. Moore stated, at this time she was unable to fill out any statement due to the fact that she had to be on the movie set to start filming," the responding officer wrote, according to People. "I also advised Mrs. Moore that she can always call back whenever she had the time to continue."

Williams and Moore have bickered all season, with the latter questioning Williams' ex-husband's sexuality.

According to teasers that Bravo released of Sunday's show, Moore took the goading up a notch during the reunion -- using a scepter and bullhorn.

The clip then shows the two women in each other's faces. But viewers will obviously have to tune in to catch the scuffle in all its glory.

The show is never short on drama.

In January, the husband of another co-star, Phaedra Parks, was arrested in connection with a fraud scheme that allegedly stole millions of dollars.