The invisible man in healthcare 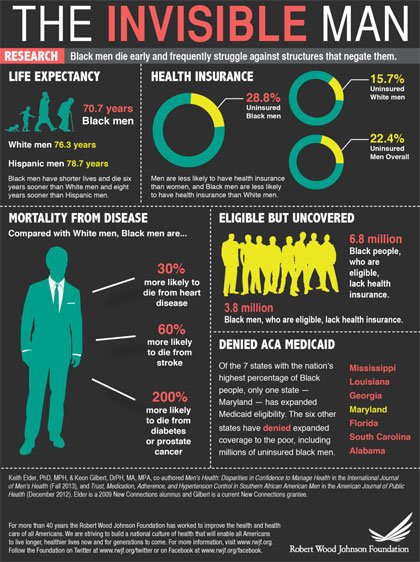 He is missing from the health care system. He is less likely to hold a job that provides health insurance. Otherwise, he is underinsured. Despite chronic poverty that cries out for relief, he often slips through the cracks of a frayed social safety net. Medicaid, focused on pregnant women and children, rarely includes him. He bears a disparate burden of disease. He dies early and struggles frequently against structures that render him invisible.

That reflection, delivered by Keith Elder, flows from the shared mission he and his colleague Keon Gilbert have embraced: bringing Black men into public conversations about health, health care, and health reform.

Elder, PhD, MPH, chairs the Department of Health Management and Policy at Saint Louis University’s School of Public Health. His work moves beyond disparities and dysfunction, expanding the research to expose the breadth and depth of Black men’s health issues from cradle to grave. Gilbert, DrPH, MPH, MPA, an assistant professor in the department of Behavioral Sciences and Health Education, focuses on outreach, education, and interventions that increase Black men’s access to social capital in order to improve overall health outcomes.

They are co-authors of recent studies: “Men’s Health Disparities in Confidence to Manage Health,” published in 2013 issue of the International Journal of Men’s Health, and “Trust Medication, Adherence and Hypertension Control in Southern African American Men,” which appeared in the American Journal of Public Health in December 2012.

They both credit New Connections—a Robert Wood Johnson Foundation (RWJF) initiative that works to expand the diversity of perspectives informing RWJF program strategy—with helping to enhance their research agendas, and deepening their network of support.

Elder (a 2009 New Connections alumnus), whose research marked some of the seminal data on Black men’s health status, encouraged Gilbert to seek RWJF support. A current fellow, Gilbert is using his New Connections grant to engage Black men around access to the Affordable Care Act (ACA). The goal is to understand how to help those without insurance obtain it, and to persuade those who have it to use it more often by seeking routine and preventive health care services.

One of the first hurdles confronting Black men is health coverage. Second, and more fundamentally, many Black men do not readily access health care even when they are insured. Elder notes that Black men with health insurance are two times less likely to use it than other groups.

“Black men are one of the hardest groups to reach. No one is looking to engage them, and they are just not plugged into the systems,” says Gilbert.

“Our published research is important, but the people we need to reach aren’t in the academic world,” says Elder. “They are in the barbershop, on the basketball court, and in communities that are medically underserved.”