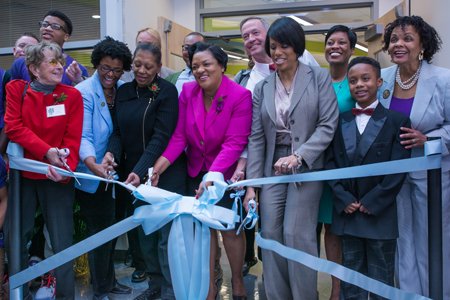 BALTIMORE — The Waverly Elementary/Middle School community celebrated the opening of its new state-of-the-art school building with a ribbon-cutting ceremony on Thursday, April 10, 2014.

Governor Martin O’Malley, Mayor Stephanie Rawlings-Blake, state and city lawmakers, community leaders, partners and other invited guests joined Dr. Shanaysha Sauls, chair of the Board of School Commissioners, and Waverly staff, students and families for a special program marking the completion of the first phase of a two-phase construction project.

Guests who toured the building had an opportunity to see the ultra-modern classrooms equipped with the latest technology, art and music rooms, and many other features and amenities that will provide students and staff with an environment that supports 21st-century teaching and learning.

“I love the new school,” said 8th grader Mone Williams. “It’s kind of sad that it is my last year here. It’s such a beautiful school— way better than the Waverly that I have attended since Pre-K.”

The Waverly Elementary/Middle School building is Baltimore City Public Schools’ first totally new school building since 1998. It gives the city a glimpse into the future of the 21st-Century Buildings Plan, which will bring new and renovated buildings to school communities across Baltimore.

Waverly Principal Amanda Price is thrilled with the new building. “The new school is a very inviting place for all to come and learn,” she said. “I believe that every student in Baltimore City deserves a new school just like Waverly.”

The new Waverly building is approximately 133,000 square feet and is designed to house 900 students from pre-kindergarten to grade eight. It also includes space for before and after-school care. The total cost of the building is $26.9 million. Construction of Phase II, is expected to be completed by December 2014.