Meb Keflezighi is American, and so am I

"I am black. I am Ethiopian. I am American," author writes 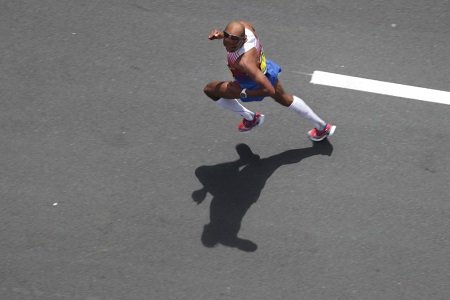 The first American man to win the Boston Marathon since 1983 crossed the finish line Monday, triumphant in a storied race that has become a national symbol of resiliency and determination. Race officials said Meb Keflezighi, 38, won the men's division, with an official time of 2:08:37. Taylor Hartz/BU News Service

(CNN) — I was born in Ethiopia, raised in Oklahoma and Colorado, and ended up in Brooklyn, New York.

Coming to America from Ethiopia, a place where black and white were only colors that had little to do with race, I had to learn English, and also the language of identity.

In America, I was black.

So when some online commenters questioned whether Boston Marathon winner and Eritrean-American Meb Keflezighi is truly "American," it reminded me of my own experience as an immigrant who became a naturalized American citizen and embraced a new identity.

My parents, two brothers and I had an incredible life in Ethiopia.

We always had the newest toys and clothes from my father's frequent work-related trips abroad.

There were lots of friends and just as much family. Life was very communal, much like our style of eating.

Of course, Ethiopia was not perfect, but it was all that I knew.

My well-traveled parents wanted to grant my brothers and I the opportunities that America offered.

Movies shaped my brothers' and my perception of America. As far as I was concerned, everyone lived in massive homes, owned multiple cars and was generally happier.

The movie "Coming to America" stunned me the most. The images of homeless people and the rundown apartment occupied by the characters played by Eddie Murphy and Arsenio Hall contradicted the America of my imagination.

In the weeks before leaving Ethiopia, my older brother Yoseph and I used to stay up late talking about how a group of welcoming American friends, a brand new American car and a huge American house would soon be ours.

But landing in Oklahoma City, our expectations soon dissipated.

From the thick, humid air that permeates Oklahoma in August to the instant feeling of being an outsider, we began to breathe less easy.

In my fourth grade class, my peers were not as curious about me as I was about them. They avoided me and teased me for being African.

I mostly attributed my peers' distaste for me to my country of origin, until the day my older brother Yoseph came home from school after getting into a fight with a boy.

The boy had called him a "nigger."

I soon realized it wasn't just because of our funny accents or nationality that people treated us differently.

In America, we were seen as "black." I became painfully aware of my brown skin, my unruly hair, and the disapproving looks directed my way.

And so my introduction to American culture began.

By the time my family moved to Colorado, the outsized expectations of America were a distant memory.

I felt I had a better grasp of American culture and my new black identity. My English was fluent, without a trace of an accent; it allowed me to socialize with less reluctance.

I quickly made friends at my junior high school and became involved in extracurricular activities. I found comfort in having friends that looked like me.

By the time I was a teenager, working weekends serving meals at a retirement home, I learned the difference between subtle and overt racism.