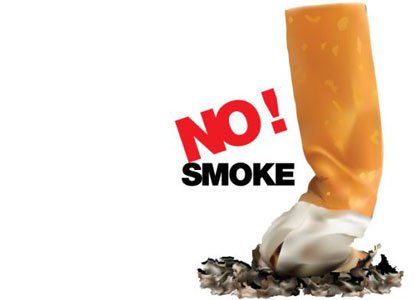 My mother once felt badly because we didn't have an ashtray in our house. Many of our relatives smoked. They would come to our house and sit for an hour or more and light up while sitting in the living room. She stated, "I don't have an ashtray to offer our guests," as though we should have felt embarrassed and inhospitable.

It wasn't long after that statement that a couple of ashtrays appeared in our house and my uncles and other visitors would sit and knock the ashes off in our new ashtrays. My parents did not smoke and my father put the fear of God into me when it came to smoking. I dared not ever light a cigarette up in his presence or I would be in serious trouble. Yet, all around us friends and family smoked.

Eventually, most of our smokers died. Most of them died in their early seventies. I had a couple of smoking cousins who died much younger. I've inhaled enough smoke from family, farmers and church people to do me a lifetime.

I met a lady the other day, about fifty years old, carrying a oxygen tank in one hand and a cigarette in the other hand. I don't know what she is thinking.

I am for American liberty all the way. If someone wants to smoke then let that person smoke. However, I don't want to pay for it with my life nor do I want to pay the growing national medical bills.

Smoking costs American taxpayers billions a year. Each year we have to "cough" up hundreds of dollars per person to pay the medical bills of the American smoker. Cigarettes are already heavily taxed and a large portion of the tax should go to the state's Medicare/Medicaid program because smokers will eventually need serious medical treatment.

A case can also be made for alcohol sales and even junk food. However, we have to eat and junk food is all many Americans can afford.

Colorado, Washington State and more to come are now turning to marijuana. If people want to smoke it so be it but let there be enough tax to cover the medical costs.

Healthy Americans should get a tax break. People who keep their body mass index within a determined number and under should be rewarded when filing their income tax report.

Nobody wants to deal with this issue but we can't afford to ignore it any longer. A healthier America would save this nation from financial collapse.