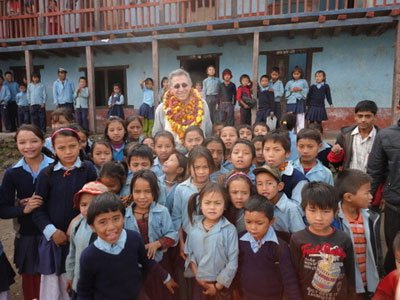 Back in 2013, Robert Gruber, the owner of A People United collaborated with the Santi School Project with the goal of improving education in Nepal. Gruber was thrilled to receive the 2013 Humanitarian Award at The Maryland Fashion Awards for his work in educating Nepali children. His mission to help others began by being drafted in the Vietnam War.

After finishing law school after the war, he started a law practice with a group of friends to specialize in non-profit and cooperatives. Feeling as though his practice wasn’t giving him any satisfaction, Gruber found that he really enjoyed teaching law instead. Before coming to Baltimore to get a master’s degree in public health, he visited India and Nepal. He said, “It was like going back in time but I was very, very aware of how poor they were at the time and this was between 1985, or 86.” He decided to switch his major to Third World Public Health.

One day while driving to work on a sunny day he had an epiphany that he should work with women in India and Nepal to help send their kids to school. “I was very liberated. Even if you misstep a thousand times, but you go into something with enough passion it will work itself out.” Gruber first began by working with farming cooperatives but later focused on working with women in India and Nepal. That’s where he found his love for beading and fabrics, which took him Guatemala to study weaving techniques.

In 1990, he teamed up with a designer he met at a fashion show in Nepal to create great products. While wholesaling in America, he provided educational opportunities for children in Nepal. In time, the schools grew from fifteen students to two hundred and employed more staff, but progress was halted by Nepal’s Maoist Revolution and he moved his production to India.

Wanting to keep on the path of his mission, he found a group called Santi School Project and became a board member to help both sponsor and give money. “Our outlook is quite different. Instead of just trying to send a small group of kids to private school, we decided that we would work on improving the public schools throughout Nepal. That’s a pretty big task that we’re probably not going to be too successful, but that’s actually the goal.”

Despite challenges including children dropping out after 8th grade and low teacher pay, the Santi School Project continues to thrive. Gruber says he’s feels blessed to be able to help people across the world

“I’m not a religious person but I have always liked the phrase ‘Do your best and leave the rest to the Lord’ because all we can do is our best. I feel blessed being able to travel and see people living lives differently than mine,” he said.