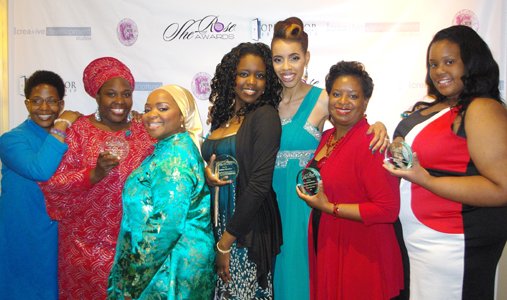 Local educator, advocate, survivor, and founder of The SheRose Awards Gala, LaQuisha Hall, said, “It is important to our community that survivors of abuse know that there is someone advocating for them, that they know they are not alone, and that someone is standing for them during their lifelong healing process.”

The 2014 SheRose Awards Gala honorees included Dr. Cecelia Martin; Callie Keen; Alexus Hobbs; Tiffany Jeffers; Candace Saunders; and Phoenix Rising Baltimore, which is comprised of Sister Tracy, Reah Idris, and Nikasha Uqdah. During the evening’s festivities, honorees shared their personal experiences of resilience through their journey of healing and overcoming abuse. Honorees and other survivors in attendance were recognized during the gala as efforts to empower those who face sexual violence. The keynote speaker of the evening was abuse survivor, author and founder of The Invisible Sorority, Ty Johnson-Anderson. Viki Mohamed served as the Mistress of Ceremonies.

Hall’s personal story of resilience and surviving sexual abuse is evident in the work that she does to advocating for victims of abuse. In 2008, she founded a dynamic mentoring program for middle and high school girls as well as created a community, iEmpower. Aspire. Transform. (iEAT) to inspire women to live whole lives.

“We support this effort because we recognize that in order to empower and heal families, that we must first reach [people] one by one and take time to allow survivors’ stories to be heard,” said Pastor Joel Anderson of Open Door Fellowship and partnering sponsor of The SheRose Awards Gala. The gala helped to raise funds to further the advocacy and prevention of sexual abuse in the Baltimore metropolitan area, the state of Maryland, and nationally.