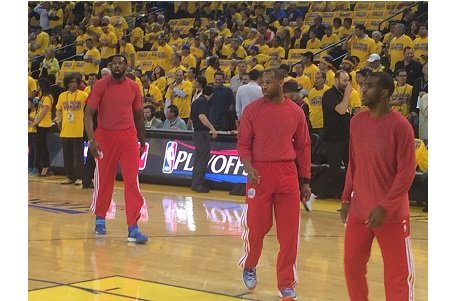 The Clippers players staged a silent protest. As they warmed up for an NBA playoff game, the players removed their warmup shirts bearing team logos to reveal red T-shirts worn inside out, with the logos hidden. They finished warming up, removed the red shirts and played the game wearing their regular uniforms.

The National Basketball Players Association demanded Sterling be barred from all playoff games this season. The players also want an accounting of past accusations of racism against Sterling; an explanation of what kind of discipline might be issued; assurance that the league commissioner will work with the association; and assurance the investigation will be conducted swiftly.

And throughout the day, past stars including Michael Jordan slammed Sterling.

Sterling wasn't there to see the protest or his team lose 118-97 to the Golden State Warriors. He agreed to stay away from the game because of the controversy that heightened Sunday when the website Deadspin released an additional audio recording of a conversation that purports to be Sterling talking with girlfriend V. Stiviano earlier this month.

Neither Deadspin nor TMZ, which released a similar recording Saturday, said where they got the recordings. Stiviano's lawyer's office said Sunday that she didn't release the recordings but that they're legitimate.

"This office understands that the currently released audio tape of approximately 15 minutes is a portion of approximately one (1) hour of overall audio recording of Mr. Donald T. Sterling and Ms. Stiviano, and is in fact legitimate," Mac E. Nehoray said in a news release. "Ms. Stiviano did not release the tape(s) to any news media."

The 15-minute Deadspin recording purports to be Sterling talking with Stiviano about her Instagram photo feed. The photos include images of her with African-Americans, including NBA great Earvin "Magic" Johnson.

If authentic, the remarks seem to reflect Sterling's embarrassment and frustration with Stiviano over her associating with African-Americans at Clippers games and for posting such pictures on her Instagram account.

Jordan, considered the league's greatest player and now the majority owner of the Charlotte Bobcats, said: "As an owner, I'm obviously disgusted that a fellow team owner could hold such sickening and offensive views. ... As a former player, I'm completely outraged. There is no room in the NBA -- or anywhere else -- for the kind of racism and hatred that Mr. Sterling allegedly expressed."

NBA legend Kareem Abdul-Jabbar, who was a Clippers special assistant coach in 2000, told CNN: "I know him. I know his voice. I am not surprised by this very much."

But Abdul-Jabbar said Sterling was congenial in person and said he never heard any racist words from Sterling. Still, the recording shows a "repugnant attitude for someone to have, and for him to be an employer for so many people of color, it kind of blows your mind."

In the latest recording, a man and woman talk about the photos, and he tells her he cannot change cultural beliefs, Deadspin reported.

The woman says she doesn't think the man is racist but the people around him have "poison minds."

"It's the world! You go to Israel, the blacks are just treated like dogs," the man says.

He says there are white Jews and black Jews, and they are treated 100% differently.

"And is that right?" the woman asks.

"It isn't a question -- we don't evaluate what's right and wrong, we live in a society. We live in a culture. We have to live within that culture," the man replies.

When the woman says she doesn't share the man's views about race, he tells her: "Well, then, if you don't feel -- don't come to my games. Don't bring black people, and don't come."

The woman, who says she is of mixed race, reminds him that most of his team's players are African-American.

The woman compares racial discrimination to the Holocaust.

"And you're Jewish. You understand discrimination," she says.

The man disagrees with the analogy and says that what he's talking about is not discrimination.

"There's no racism here. If you don't want to be walking into a basketball game with a certain person, is that racism?" the man says.

NBA Commissioner Adam Silver said Saturday that Sterling, who has owned the basketball franchise for nearly three decades, is now under investigation over the comments attributed to him.

Silver said that the league's investigation will seek to determine whether the recording is authentic and to figure out the context in which these "offensive and disturbing" comments were made.

But he cautioned that Sterling must be afforded due process, so he would not speculate on any possible punishment, but said that the investigation will move "extraordinarily quickly."

Clippers President Andy Roeser on Saturday suggested a woman -- whom he doesn't mention by name -- was "getting even" with Sterling over a lawsuit.

Rochelle Sterling, the wife of Donald Sterling, filed a lawsuit last month against Stiviano, who she said was having an affair with her husband.

In the complaint, Rochelle Sterling accuses Stiviano of targeting extremely wealthy older men. The suit claims that Donald Sterling used the couple's money to buy Stiviano a Ferrari, two Bentleys, and a Range Rover and that Stiviano took possession of a $1.8 million duplex through fraud. Sterling also gave her nearly $250,000 in cash, the court document says.

Stiviano countered in another court document that there was nothing wrong with Donald Sterling giving her gifts, and she never took advantage of the Clippers owner, who made much of his fortune in real estate.

'And don't bring him to my games'

Speaking about the recording, Roeser said, "We do not know if it is legitimate or it has been altered. We do know that the woman on the tape -- who we believe released it to TMZ -- is the defendant in a lawsuit brought by the Sterling family alleging that she embezzled more than $1.8 million, who told Mr. Sterling that she would 'get even.'"

According to the website TMZ, Sterling reportedly made discriminatory remarks during an argument he had with Stiviano on April 9. TMZ on Saturday posted a 10-minute recording purporting to be the argument.

The man alleged to be Sterling takes particular exception to a photo she posted to Instagram with Johnson.

"In your lousy fing Instagrams, you don't have to have yourself with -- walking with black people," the man says.

"If it's white people, it's OK?" she responds. "If it was Larry Bird, would it make a difference?"

"I've known (Magic) well and he should be admired. ... I'm just saying that it's too bad you can't admire him privately," the man on the recording says. "Admire him, bring him here, feed him, fk him, but don't put (Magic) on an Instagram for the world to have to see so they have to call me. And don't bring him to my games."

Roeser said Sterling is upset and apologizes for sentiments attributed to him about Johnson. "(Sterling) has long considered Magic a friend and has only the utmost respect and admiration for him -- both in terms of who he is and what he has achieved."

Sterling is "emphatic that what is reflected on that recording is not consistent with, nor does it reflect his views, beliefs or feelings," Roeser said.

President Barack Obama weighed in on the controversy.

At a news conference with Malaysian Prime Minister Najib Razak on Sunday, Obama was asked about the comments on the recording.

"When ignorant folks want to advertise their ignorance, you don't really have to do anything, you just let them talk. That's what happened here," the President said.

Obama also said Sterling's alleged comments are an example of how "the United States continues to wrestle with the legacy of race and slavery and segregation."

"We also suggest that African-Americans and Latinos should honor (Sterling's) request and not attend the games," Alice Huffman said in a statement released Saturday.

Sterling was to receive a lifetime achievement award at an event next month to mark the 100th anniversary of the Los Angeles NAACP, but the national organization tweeted Sunday that wouldn't happen.

The release of the recordings comes at a bad time for the Clippers, who are playing in the first round of the NBA playoffs.

"I don't know if I'm surprised or not," Clippers head coach Doc Rivers said at the team's practice Saturday, adding that he "obviously" didn't like the comments.

Rivers, who is in his first year coaching the team, told reporters that he didn't want the controversy to detract from the playoffs. He said he would be the sole person speaking on behalf of the team.

But Chris Paul, a Clippers player and president of the National Basketball Players Association, issued a statement Saturday saying "this is a very serious issue which we will address aggressively."

Helping the players association will be Kevin Johnson, a former NBA player and current Sacramento, California, mayor. "There needs to be an immediate investigation, and if the reports are true, there needs to be strong and swift action taken," Johnson said in a statement on the NBPA website.

Miami Heat forward LeBron James was one of several players and former players who weighed in on the controversy. James spoke to reporters before the playoff game against the Charlotte Bobcats Saturday night.

"Should this guy continue to be an owner?" asked Shaquille O'Neal, who also called the comments "repugnant."

"We cannot have an NBA owner discriminating against the league," said Charles Barkley. "We're a black league."

Both discussed the issue during the Atlanta Hawks-Indiana Pacers halftime program on TNT, which like CNN is a division of Time Warner.