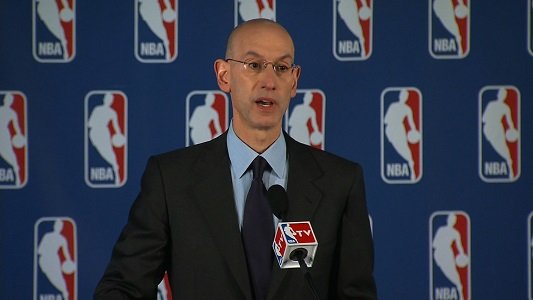 continued — On Saturday, the website TMZ posted a 10-minute recording of a conversation, reportedly between Sterling and his girlfriend, whose legal name is V. Stiviano. According to the website, the conversation occurred on April 9.

On the recording, the man and woman argue about photos posted to Instagram in which she appears with African-Americans. The man says he doesn't want the woman bringing any black people to games with her.

Team President Andy Roeser issued a statement this weekend that said "what is reflected on that recording is not consistent with, nor does it reflect (Sterling's) views, beliefs or feelings." He suggested that the recording was an attempt by Stiviano to "get even" with Sterling.

Silver has promised the league would give Sterling due process but would act quickly.

It is unclear whether Silver could order Sterling to sell the Clippers, a team he bought for $12 million in 1981 and is now worth $575 million, according to Forbes magazine. A lifetime suspension and fine of at least $1 million is more likely, experts say.

The commissioner might announce an indefinite suspension while the investigation continues, CNN's Rachel Nichols reported.

"He (eventually) could suspend Donald Sterling maybe for a year, maybe even two years or even indefinitely," Nichols said. "And the idea and the hope would be that if he made him so uncomfortable, if he was removed from day-to-day operations, if sponsors are pulling out the way that they are, there would be some way to convince Sterling, it's in your best interest and the interest of everyone else to sell the team."

Nichols likened the situation to that of the late Marge Schott, who owned the Cincinnati Reds and made racist and other insensitive comments. She was suspended twice, the second time in 1996, and sold the team in 1999.

Other NBA owners have called the remarks attributed to Sterling "abhorrent," "reprehensible," "hurtful," and said they have no place in the league or anywhere in society.

And they all said they have confidence Silver will handle the matter well.

Charlotte Bobcats owner and Hall of Famer Michael Jordan made a rare public statement on a controversial subject.

"As an owner, I'm obviously disgusted that a fellow team owner could hold such sickening and offensive views," he said. "As a former player, I'm completely outraged. There is no room in the NBA -- or anywhere else -- for the kind of racism and hatred that Mr. Sterling allegedly expressed."

In the recording, the man seems mad about a photo the woman posted to Instagram with Magic Johnson, now a part owner of the Los Angeles Dodgers.

"In your lousy fing Instagrams, you don't have to have yourself with -- walking with black people," the man says.

"If it's white people, it's OK?" she responds. "If it was Larry Bird, would it make a difference?"