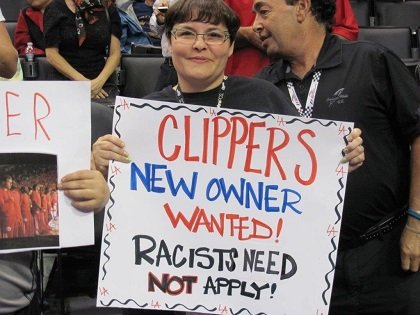 (CNN) — "You go to Israel, the blacks are just treated like dogs," the Guy Who Sounds Like Sterling said on the recording leaked by Somebody Perhaps His Mistress.

On the surface, Sterling might have a point --- even if no one can make any sense of where he was going with it --- that dark-skinned Jews have experienced adversity in the Jewish state. But to say ''dogs" isn't quite kosher.

Israel touts with pride successes like Operation Solomon, its airlift of Ethiopian Jews in 1991 --- where in one push, more than 14,000 were transported to Israel over 36 hours --- to escape persecution in a homeland where the religion has been practiced since Biblical times. There's no question that life, especially the fact that they are alive, is better in the Promised Land.

Yet it hasn't been overflowing with milk and honey. Ethiopian Jews are among the poorest Israelis, with 72% living below the poverty line and unemployment affecting as many as six in 10 Ethiopian men and three-quarters of women, according to the Jewish Community Relations Council of Greater Boston.

Consider also that many came from villages without electricity or running water, and that 70% were functionally illiterate in their native Amharic and never learned to read or write Hebrew. It's obvious they'd have trouble integrating into an industrialized society.

Frustrations boiled over two years ago in the city of Kiryat Malachi, when thousands demonstrated against discriminatory practices, including apartment owners who refused to rent to Ethiopian Israelis.

"Basically, this man is stupid. He doesn't know any history of African people," said Mekonen, who in his film "400 Miles to Freedom" documented his own harrowing escape from Ethiopia as a child, getting separated from his family and nearly dying in the desert.

The other side of the Ethiopian Jewish story counts successes like members of the Knesset, writers and musicians, and Yityish Aynaw, the current Miss Israel.

While acknowledging that assimilation and rejection are real, Mekonen said: "There's a lot of change from what happened in the '80s. We had the issue of language and communication and culture. They see us as different, but year-by-year, it's improved."

That's because the community isn't just sitting there taking it, he says.

"They don't give up. They're doing something. We have a voice."

If it's necessary to prove Sterling wrong (requisite disclaimer again: assuming it's him), Mekonen's message of empowerment flies in the face of the repeated theme on the tape that the world is racist and there's nothing you can do about it.

"It isn't a question. We don't evaluate what's right and wrong. We live in a society. We live in a culture. We have to live within that culture," the guy in the recording says to sum up his black Jew narrative --- which, by the way, isn't clear about who he's referring to.

"Which people is he talking about when he says 'black Jews?'" asked Mekonen. "That could be people from North Africa, Asia, India, Israeli Arabs"--- all with very different cultures.

Shocking. Can't believe that (a guy that sounds like) Sterling would stereotype them.

Robin Washington is a research scholar for the San Francisco-based think tank Be'chol Lashon and co-founder of the Alliance of Black Jews. He lives in Duluth, Minnesota. He was previously the editor of the Duluth News Tribune. You can follow him on Twitter @robinbirk. The opinions expressed in this commentary are solely those of the author.