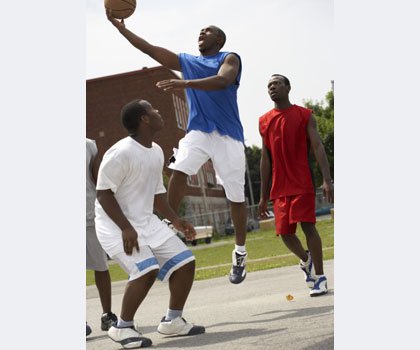 Player tryouts will be held on Saturday, August 9, 2014 at Central Park located at 2610 McCulloh Street in Baltimore City at 11 a.m.

BALTIMORE — Ball Up is giving local basketball players throughout the Baltimore area the chance to go pro during the 2014 Ball Up Summer Tour. Players are invited to bring out their best skills as they compete for a contract worth $100,000 and a spot on the Ball Up All-Star roster, awarded at the conclusion of the tour.

While cheering on the local basketball players as they go head to head against the Ball Up All-Stars at 6 p.m. on August 9, 2014 at SECU Arena located on the Towson University campus at 8000 York Road in Towson, families can take in the excitement including guest NBA all-star coaches Metta World Peace and Gilbert Arenas, musical entertainment and special guest appearances.

Local untapped streetball talent throughout the Baltimore area can take their shot and come out to Central Park located at 2610 McCulloh Street in Baltimore at 11 a.m. on August 9, 2014 to participate in the open run tryouts for the opportunity to compete against the very best in streetball.

Ten players will be selected to represent Baltimore in a competition against the Ball Up team in a thrilling, heart-pounding display of talent and skill. The Ball Up All-Stars have yet to lose in the four-year history of the summer tour. Throughout the tour, two MVPs from each city will be invited to participate in a two-day combine camp in which 10-

“This year, we anticipate some of the toughest competition that Ball Up has faced, especially with a stop in Baltimore,” said Demetrius Spencer, CEO of Ball Up. “The level of skill and talent we find each year grows exponentially and we always look forward to discovering new talent on the court.”

The Ball Up Summer tour offers family entertainment and an opportunity for local basketball players to become professional athletes. Ball Up travels to major U.S. cities including Los Angeles, Louisville, Indianapolis, Atlanta, New York, Birmingham, Chicago, St. Louis, and Las Vegas. Their live events and open run tryouts will be filmed for the top rated television series, "Ball Up: Search for the Next" airing this fall on Fox Sports.

To pre-register for the open run tryouts, tickets, or tour information, visit: www.BallUp.com.