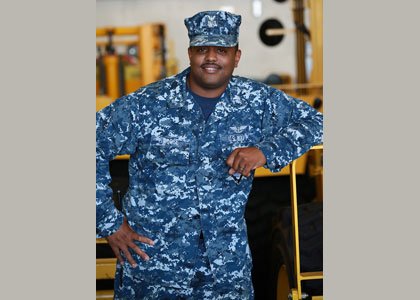 SAN DIEGO — Petty Officer 1st Class Apollo Morse, an aviation boatswain's mate from Baltimore and 1997 graduate of Mergenthaler High School, is serving in the U.S. Navy aboard USS Somerset (LPD 25), one of the world's most modern, networked, survivable, and transformational warships.

USS Somerset is named in commemoration of the September 11, 2001 attacks. The name honors the passengers and crew of United Airlines Flight 93, whose actions prevented terrorist hijackers from reaching their intended target, forcing the airplane to crash near Shanksville, Somerset County, Pennsylvania. Approximately 22 tons of steel from a crane that stood near Flight 93's crash site was used to construct Somerset's bow stem, embodying the strength and determination of the people of the United States: to recover, to rally, to take the fight to the enemy.

The San Diego-based USS Somerset is a San Antonio-class amphibious transport dock, protecting and defending America on the world's oceans. Tens of thousands of young American men and women are deployed around the world doing just that, and they are there around the clock, far from our shores, defending America at all times. Amphibious transport dock ships are warships that embark, transport, and land elements of a landing force for a variety of expeditionary warfare missions. These ships support amphibious assault, special operations or expeditionary warfare missions and can serve as secondary aviation platforms for amphibious ready groups.

Approximately 28 officers, 333 enlisted men and women and three Marines make up the ship's company, which keeps all parts of the ship running smoothly— this includes everything from washing dishes and preparing meals to handling weaponry and maintaining the engines.

"A ship is but a steel vessel, it is the crew that brings a ship to life. USS Somerset is truly a fine warship and this crew that mans her is second to none. The Sailors and Marines of Somerset have been working diligently to prepare this war ship. Through our service in the United States Navy, we will strive to honor those who have sacrificed so much to preserve the freedoms we cherish today," said Capt. Thomas L. Dearborn, the ship's commanding officer.