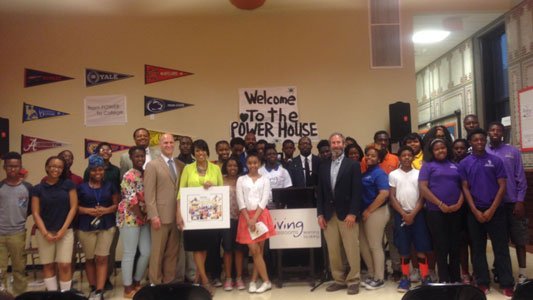 It’s been less than a year since the Charm City-based Living Classrooms Foundation launched its POWER House Teen program, which provides academic support, mentoring and college preparation activities for underserved high school students who live in the Perkins Homes development in East Baltimore.

During the past calendar year, the program has realized success beyond expectations.

The phone carrier, AT&T, which provided underwriting for the initial startup of POWER House, kicked in an additional $65,000 because of its firm belief in the program and the successful way program officials have led the high school attendees.

Further, young students whose grades had previously declined and whose thoughts of college were only fleeting are now displaying a confidence that their teachers and parents couldn’t have dreamed of before the program’s inception.

“It’s going well. We’ve expanded to serve 40 students and our goal is to recruit them and put them in an extensive program in which they attend three days a week and on Saturday,” said Talib Horne, vice president of the Living Classrooms Foundation.

Horne says the POWER House program operates at the National Academy Foundation High School at 200 E. North Avenue and at the POWER House community center in the Perkins Homes public housing development that sits between Fells Point and Little Italy.

The Perkins Homes are considered one of the most economically disadvantaged areas in the city where more than 91 percent of the residents are African Americans, and at least seven percent are Latino.

“This program helps the students to maintain academic performance and it motivates them,” Horne said. “We’ve taken them on the Lady Maryland around Chesapeake Bay and for many of them it was the first time on a boat. It’s all day learning and the program helps prevent them from dropping out.”

Because students who live in the Perkins Homes have a choice of 28 different schools they can attend, it’s important that POWER House officials focus their efforts where they could get the most participation, according to Horne.

“That’s why we have a partnership with the National Academy Foundation and so we have focused on students there,” he said. “We’ve had to come up with in and out of school programming and its work because the students’ confidence levels are increasing, they are now doing community service projects and now there is an expectation of going to college and no one is dropping out.”

Horne says POWER stands as an acronym for Providing, Opportunities, to Work, Expand, and Rise. The program has five core areas, education, career development, character, and civic development, health and life skills, the arts and cultural enrichment, and health and wellness.

The organization serves more than 40,000 youth and young adults each year in the Baltimore and Washington, D.C. area.

“The Teen Program provides valuable STEM-skills and opportunities for youth to gain hands-on experience and exposure within STEM careers,” Bond said in a statement.

“We are grateful to AT&T for their support of this meaningful program, which is greatly needed youth to widen their horizons and give meaningful skills.”

At a news conference last month, Baltimore Mayor Stephanie Rawlings-Blake said programs like this one are vital to the future success of the students— and to competitiveness of the city.

“Providing quality educational opportunities for our young people is key to attracting families and keeping families in Baltimore,” Rawlings-Blake said. “The POWER House Teen program is a great example of the public and private sectors working together to create new opportunities and brighter futures for children in Baltimore.”