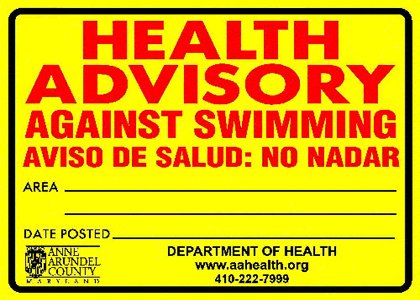 (ANNAPOLIS) — With news accounts of “flesh-eating” bacteria infections suffered by bathers in Maryland and the District of Columbia in recent days, the Chesapeake Bay Foundation (CBF) is reissuing its 2009 report that documented the rise in such infections. The report demonstrated how some of our waters have become unhealthy not only for fish, but also for people who fish, swim, boat, and drink contaminated water.

“Short-term, these infections and other ailments contracted by fishermen, swimmers and others can be avoided with simple precautions. But these health problems signal the urgent need to continue reducing pollution in the Chesapeake Bay and its tributaries. We must follow the Chesapeake Clean Water Blueprint. That plan holds states accountable to make our water safe,” said CBF President Will Baker.

Vibrio, the bacteria most in the news this summer, is a saltwater bacteria, some varieties of which can cause life-threatening skin and blood infections and intestinal illnesses. The CBF report, “Bad Water 2009: The Impact on Human Health in the Chesapeake Bay Region,” documented an increase in the number of vibrio infections in the Bay area, possibly the indirect result of warming water temperatures combined with pollution.

The report also noted other pathogens and toxics in the water as a result of pollution:

*Blue green algae, also known as cyanobacteria, which is stimulated by nutrient pollution and warmer weather. The bacteria can cause liver disease, skin rashes, nausea, and vomiting.

*Cryptosporidium bacteria is associated with polluted runoff carrying animal waste, and sewage and septic overflows. County and volunteer water monitors test some swim areas for such bacteria, but often not after it rains when the bacteria is most likely to be present.

*Mercury is a heavy metal, often released by the burning of coal. It pollutes waterways, taints fish, and can potentially damage human intelligence. In the Chesapeake region, governments have issued statewide fish-consumption advisories for mercury for all lakes and rivers in Pennsylvania and Maryland, and for many rivers in Virginia.

*Nitrates from polluted runoff cause not only low oxygen “dead zones” in the Chesapeake Bay, but also can hurt the health of rural families that drink from private wells. Drinking water with too much nitrates can raise the risk of cancer, nervous system deformities in infants, hemorrhaging of the spleen, and other problems.

Those who recreate in the bay or its tributaries can avoid many of these problem by avoiding swimming for 48 hours after a heavy rainstorm in the area; avoiding blue-green algae growths in the water; showering after swimming or boating; avoiding water contact if one has open sores; checking government advisors for public beaches and fishing; and having drinking water tested in rural areas.

However, people have a right to clean water and shouldn’t accept water carrying pollution and pathogens. The good news is the amount of pollution in the Bay watershed has been reduced by about a quarter since 1985, and the Chesapeake Clean Water Blueprint holding state governments and the District of Columbia accountable to finish the job of cleaning the Bay is underway. The Bay, however, is a system still dangerously out of balance. Much work remains to make the water safe enough for human contact.