The ride will closed while officials investigate, she says 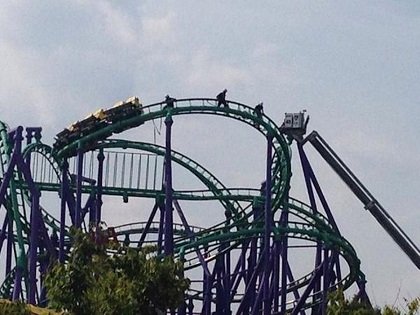 Rescuers pulled stranded riders from a roller coaster at Six Flags America in Maryland on Sunday after the ride halted on the tracks.

A train on the Joker's Jinx roller coaster stopped about 45 feet from the ground Sunday afternoon with 24 people aboard, Six Flags spokeswoman Debbie Evans said.

No one was injured, she said.

Video from CNN affiliate WJLA showed rescuers slowly helping passengers to safety, one by one. Hours after the rescue operation began, Prince George's County Fire Chief Marc Bashoor said all 24 passengers were safely on the ground.

Bashoor posted a series of photos of the rescue on Twitter.

"Firefighters have reached the 1st car by tower bucket - each of 6 cars will be emptied slowly," he wrote.

"Riders being strapped in place within each car, before cars passenger restraint can be released," he said minutes later. "Then pulled 1 by 1 - 1st 2 people in bucket."

"The ride has a sophisticated, computerized safety system that can cause such ride stoppages. While we are not yet sure what caused the stoppage, the ride performed as it is designed to," she said.

On its website, Six Flags America says the ride normally lasts for just over a minute and reaches a speed of 60 mph.

"Without any pauses or braking, you'll blast through a cobra roll, a sidewinder loop, a corkscrew, and countless swift reversals in between," the website says.

When the ride blasts to 60 mph in just over three seconds, the description says, "that'll wipe that smirk off your face, as you are shot like a bullet into four inversions compressed into a half-mile pile of twisted steel."

Evans said Sunday that the Joker's Jinx would be shut down while officials determine what happened.

"The ride will remain closed until the park completes a thorough investigation and both the staff and ride manufacturer have determined the ride is safe for operation," she said. "The safety of our guests is our top priority."