Josiah Henson Park to be profiled on PBS Series

Josiah Henson is the inspiration for Uncle Tom’s Cabin 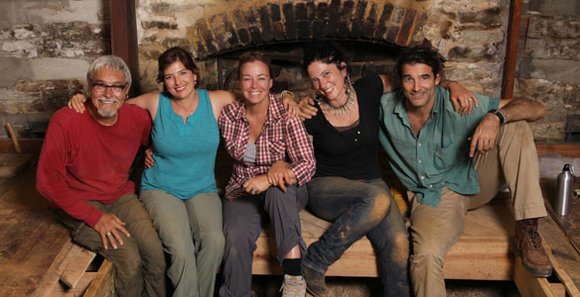 The team on location in Maryland. Can they find evidence of the life and legacy of Josiah Henson? (Courtesy Photo)

Montgomery Parks, part of the Maryland-National Capital Park and Planning Commission and the Montgomery Parks Foundation announce the premiere of “TIME TEAM AMERICA, The Search for Josiah Henson,” on Tuesday, August 19, 2014 at 8 p.m. TIME TEAM AMERICA is a PBS series that combines archaeological discovery with good story telling. “The Search for Josiah Henson,” one of four new episodes of the second season, explores Josiah Henson Park, a significant historical resource located in Montgomery County, Maryland within the Montgomery Parks system. The park is located on the former Isaac Riley plantation where Reverend Josiah Henson was enslaved for many years before his escape to freedom. Henson’s autobiography is the inspiration behind Harriet Beecher Stowe’s landmark novel Uncle Tom’s Cabin.

The TIME TEAM AMERICA production crew and on-air talent— comprised of scientists Joe Watkins, Allan Maca, Meg Watters, Jeff Brown and Chelsea Rose and host Justine Shapiro— spent three days on site working alongside Parks’ archaeologists and their many volunteers, searching for evidence of Henson-era structures and related artifacts long lost to suburban development. The archaeological exploration unearthed three layers of compacted earth flooring in the kitchen under the existing floor, which indicates the strong likelihood that the existing log kitchen sits on the exact footprint of the one described in Henson’s memoirs.

It was upon his return to Isaac Riley’s plantation in 1828 that Josiah Henson recalls sleeping on the dirt floor of the kitchen in the main house.

“After putting my horse in the stable I retired to the kitchen, where my master told me I was to sleep for the night ... that crowded room, with its earth floor, its filth and stench— The negroes present were strangers to me. Full of gloomy reflections at my loneliness, and poverty stricken aspect of the whole farm, I sat down...thinking how I could escape from the accursed spot.” —Josiah Henson, The Life of Josiah Henson Formerly a Slave, Boston: 1849

The Montgomery Parks Foundation will conduct a major campaign to raise $2 million dollars to support the educational and interpretive aspects for Josiah Henson Park. These funds will be matched by $4.85 million approved by the Montgomery County Planning Board and the County Council for the park’s development.

The Time Team America episode on Josiah Henson Park can be previewed at: http://video.pbs.org/video/2365243972/.