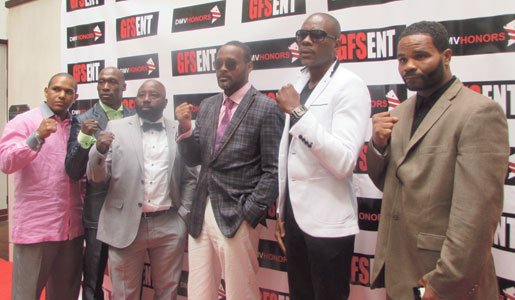 If New York is the city of dreams, then the District of Columbia is home of the champions! Boxing champions, that is. Finally six accomplished fighters from the D.C. area will get the honors they deserve on September 18 – 20, 2014 at the DMV Celebrity Weekend of Champions Launch. (Visit: www.GFSent.com for more information).

The event was announced officially on August 3, 2014 at the Washington Hotel. Never in the history of boxing has one city had five champions at one time— champions that ruled the boxing federation: William Joppy, Keith Holmes, Mark “Too Sharp” Johnson, Winky Wright, Sharmba Mitchell, and DeMarcus “Chop-Chop” Corley.

“I am so honored to be a part of this and so glad that someone is honoring us because we are from the city and have love for this city. So to be finally be honored like this is truly a blessing,” said Mark Johnson.

“This is huge and a part of boxing history, but most importantly D.C.’s history. Will it ever be done again? Not sure, but we are the only ones as well as first to do it and we carry this city and the sport of boxing on our backs,” added Sharmba Mitchell.

Others to be honored in September: Derrell “Too Sweet” Coley, Darryl Tyson, Melvin Foster and others. Attending the festivities and the host for the event was D.C. Boxing Hall of Fame inductee Henry Jones, the first known black ring announcer, “This event is much needed and we need support from the community, the media, especially black media, because these are our champions and we need to recognize that.”

The launch event was well attended by boxing enthusiasts and fans alike who wanted a chance to meet and greet the champions. If the main event in September is anything like the launch party, it should be spectacular. Sugar Ray Leonard will be presenting awards, The Mayweather family will be present and rumor has Roy Jones Jr. and Mike Tyson maybe stopping by. There will be a Golf Tournament and so much to do. Most importantly, it will be a chance to celebrate something that is well overdue with those that brought who have brought so much joy and happiness to a city that needed someone they could call CHAMP!

For more photos from the event, please visit our Facebook Page: www.facebook.com/TheBaltimoreTimes