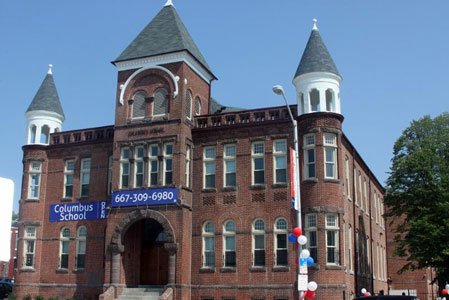 This 123-year-old building once housed one of the top performing public schools in Baltimore and represents an excellent example of Romanesque Revival architecture. It is being transformed into 50 modern affordable rental-housing units. (Courtesy Photo)

The 19th century School building in East Baltimore has been transformed into modern, energy efficient affordable rental housing for 50 families at a cost of $13 million.

“This building represents more than history and more than fine architecture,” Secretary Skinner said. “It is an important piece of the city's revitalization strategy for the North Avenue corridor.”

Constructed in 1891, the historic Columbus School building formerly housed a public school for elementary students. Believed to be one of the highest performing schools in Baltimore City at the time, the school closed its doors in the early 1970s and students were reassigned to the then brand new Harford Heights Elementary School.

“This project represents the power of transformation to push back blight," said Mayor Rawlings-Blake, adding that the goal of her administration is not just to bring new families into Baltimore, "but to give the families that are already here a reason to stay."

The Columbus School building was placed on the National Register of Historic Places in 1979.

Financing for the project was provided by DHCD, Bank of America, Capital One and Hudson Housing Capital, HSA and the Woda Group.