Africa in the Spotlight at U.S.-Africa Summit 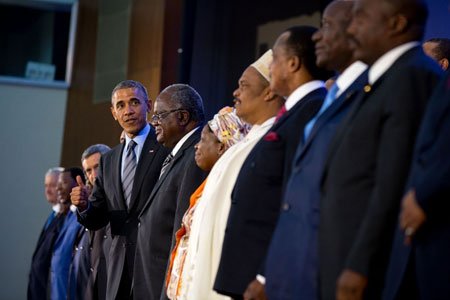 President Barack Obama joins leaders for a class photo during the U.S.-Africa Leaders Summit at the U.S. Department of State in Washington, D.C. on August 6, 2014. (Official White House Photo by Pete Souza)

Over the course of three days, Aug. 4-6, at the invitation of President Barack Obama, 51 African leaders held talks designed to strengthen trade and commerce between the U.S. and the continent.

The gathering – the largest of its kind in American history – put Africa squarely into public discourse and helped present an image far different from the one often presented by Western media, one participant said.

“From where I sit, it was absolutely historic,” said Dr. Darius Mans, president and CEO of Africare. “We had 50 countries meeting at the very highest levels. It’s the first times this was done by a U.S. president. Billions of dollars critical for Africa have been pledged. It’s important to strengthen ties with one of the great growth poles of the world.”

“A peaceful, economically strong Africa is important for everyone. Some delegates said this was late in coming but not too late. They have met in Tokyo, Brussels and Beijing. They welcome more U.S. engagement. They need the things the U.S. brings, such as technology, for example, respecting the rule of law, environmental standards and commitment to democracy.”

Mans, who has headed Africare since 2010, said he held bilateral talks with heads of state, including those from Benin and Niger, met with members of several delegations and was involved in discussions about increasing the participation of civil society groups and organizations in Africa.

“Africa is on the rise. The story to me is Africans investing in Africa for themselves,” he said. “I took part in a roundtable discussion with Mo Ibrahim, Aliko Dangote and Patrice Tlhopane Motsepe – hard-charging, incredibly successful people investing in their countries and across the continent. One head of state said to me, ‘Look, we’re very clear where we’re going.’ He said they made many mistakes and that the last century was a disaster. But he also said ‘We’re very clear about where we’re going and we need partners.’”

Ambassador Michael A. Battle, one of the organizers of the summit, called the gathering a major success, but he said a great deal of work remains.

“It doesn’t mark a new relationship with Africa, it marks a continued and enhanced partnership of the U.S. with Africa,” he said. “One hundred top African business leaders and 100 from the U.S. private sector participated. That has never happened before.”

Out of the trade talks that dominated the summit came an estimated $33 billion in investment and new trade commitments from major American private-sector companies such as IBM, General Electric, Coca Cola and Marriott.

There is a great deal of skepticism in human rights and other circles that little will change because of entrenched corruption, mismanagement human rights violations in a number of countries. It is well documented that some African leaders have exiled, murdered and jailed opponents, journalists and critics. Others engage in acts of the abuse of power, malfeasance and corruption, and several leaders have brazenly stolen money and have spirited vast amounts away to overseas banks. Meanwhile, ordinary citizens live penurious existences, often in extreme poverty, with few opportunities to improve their lives.

Emira Woods, an associate fellow of the Institute of Policy Studies, criticized the summit.

“They have reinforced the status quo,” she said during a panel discussion on the “Talk Africa” television program last week. “Inequality is the biggest issue of our time. The ‘haves’ have gotten more and the ‘have-nots’ are pushed to the side. The summit was a wonderful photo-op. Very little was concrete. It was the CEOs of extractive industries coming together to make deals with heads of state, exploiting people to benefit the one percent. We didn’t get the substantive changes needed on the continent or the global economy.”

“We’re grateful to the president for hosting this summit,” she said during an Aug. 6 press conference at the Africa24 television studio in Washington, D.C. “The hope is that the implementation of issues will develop as quickly as the summit.”

While noting that African leaders held frank discussions with Obama in a cordial atmosphere, Dlamini-Zuma said she hopes the tone and tenor established at the summit extends to the relationships developed between American private-sector companies and African governments.