Food desert ends after more than a decade 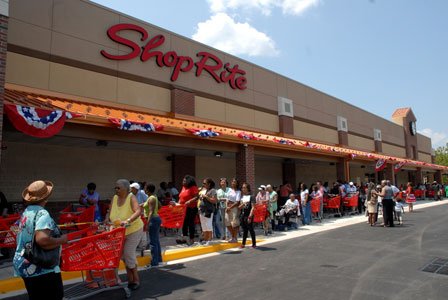 BALTIMORE — A major food desert has officially been closed and longtime residents of Howard Park like Rhona Lewis couldn’t be happier.

The owners of ShopRite have opened a state-of-the-art, 67,000-square-foot supermarket in the neighborhood and since the grand opening on July 31, the store has been packed with excited customers who have gone nearly two decades without a legitimate grocery store, Lewis said.

“To get things rolling in this community, we needed this,” said Lewis, a member of Baltimoreans United in Leadership Development (BUILD), who worked with New All Saints Catholic Church and others to convince ShopRite and community leaders to locate the store in Howard Park along Liberty Heights Avenue.

“It’s been a passion of BUILD and our church to see this happen,” she said. “We felt that at one time this was a dignified community and the supermarket that we once had, was not a good partner. We felt the pulse of the community and we hit the ground running.”

Lewis, who’s lived in Howard Park for 35 years, said community members initially reached out to the owners of Giant Supermarkets, but ultimately convinced ShopRite to open up there.

Mary Paschall, 90, a lifelong Howard Park resident told WBAL-TV during the grand opening celebration, that she and her neighbors had been frustrated living in a food desert. She said the walk to a suitable market often was long and dangerous with the nearest supermarket more than 3 miles away.

Another longtime resident, Geraldine Richardson says it was nearly impossible for the elderly to shop.

“It was very difficult for the elderly to purchase food, and many of them didn’t have transportation, so that was another problem,” Richardson said. “So, the new store is very beneficial to the neighborhood,” she said.

Making the location extra special, the owners of ShopRite already had roots in the neighborhood, officials said.

Marshall Klein, the chief operating officer of Klein’s ShopRite, says his company worked for five years to get the store opened. He said they were aware of a need to address food deserts in Baltimore and once an opportunity presented itself, ShopRite proved ready.

“When we came down and saw the community and saw how supportive they were, not just of the project, but understanding that they all needed to work together to build something, it really attracted us to the site,” Klein said.

“We are very excited to expand our service further into the city of Baltimore with the opening of a ShopRite in the Howard Park community,” he said. “We are committed to bringing ShopRite’s unique services and traditional low prices to this new location and look forward to having a positive impact on the community.”

Additionally, the store will provide access to a pharmacy, health suite, bakery, fresh fruits and vegetables, healthy fast foods, a deli and a halal butcher to accommodate the large Muslim population in the community.

“It’s an entirely different model,” Baltimore Mayor Stephanie Rawlings-Blake told reporters during the ribbon-cutting ceremony. “This is a larger store. It’s a full-service supermarket and it’s exactly what the customers in this community said they wanted, so this is a model that will work.”

Along with UpLift Solutions— a national nonprofit organization that supports food businesses, government and nonprofits to create sustainable environments for underserved communities— the Klein family invested $25 million to build the new store, which also houses two community rooms and a kitchen classroom for students in the culinary program at Calvin Rodwell Elementary School.