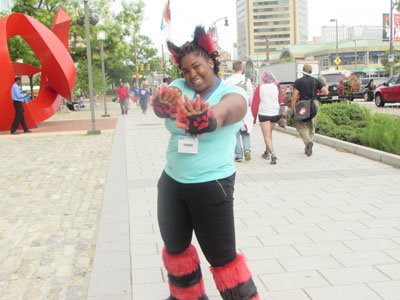 BALTIMORE — Since 1999, Baltimore has been home to Otakon, the annual three-day Anime convention, which is held at the Baltimore Convention Center in downtown Baltimore. This year’s event took place August 8 – 10, 2014. Thousands of Anime fans came from all over the world.

Sarah and Justin of Baltimore attending the 2014 Otakon Convention

You may think of it as just a weird experience with all sorts of people dressed up in crazy costumes, but for many it’s a chance to escape everyday life and for one weekend be something or someone else. This event is not just for the young, but couples and families who just simply love anime.

Sarah, who has been coming to Otakon for seven years and brought along her boyfriend, Justin for the first time this year, loves the fact that they are doing something different that they both love and get to spend quality time together.

“I love that I get to catch up with friends who I would not have expected to be here and who I have not seen in years,” said Sarah. Justin added, “I love the costumes and the atmosphere [for] fans of anime and it really is a good time.”

“This is my home away from home. This is my family. People get along. The costume play is wonderful, and once a year I get away from home and do something I love,” said Tiffany Sanmoogan, who has been coming to this convention for five years.

In 2017, this event will be moving to Washington D.C. Amber White from Norfolk, Virginia, voiced her opinion on the move, “Out of all the different anime conventions in the world, Baltimore’s is the BEST. I have been coming here for four years and I absolutely LOVE IT! I wish Baltimore would continue to host because I always have a good time. I will be back next year and I am bringing my group here to work the event.”

Otakon brings in thousands of dollars every year and hopefully, the powers that are in command, will figure out a way to hold onto an event that exposes Baltimore in a positive light. For more photos on Otakon 2014, check us out on Facebook: The Baltimore Times and online: www.baltimoretimes-online.com