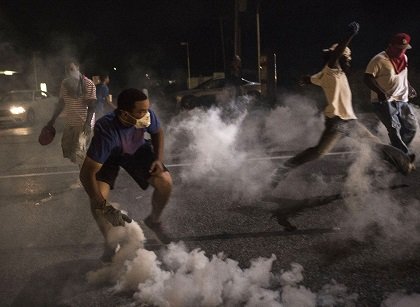 "Given these deliberate, coordinated and intensifying violent attacks on lives and property in Ferguson, I am directing the highly capable men and women of the Missouri National Guard ... in restoring peace and order to this community," Nixon said in a statement.

Gunfire, tear gas and Molotov cocktails Sunday night marked some of the fiercest clashes yet between police and protesters furious over the death of an unarmed teenager.

What began as peaceful protests spiraled into disarray after two civilians were shot and injured, Missouri State Highway Patrol Capt. Ron Johnson said. He said those civilians were not shot by police.

"Tonight, a Sunday that started with prayers and messages of unity, peace and justice took a very different turn after dark," Johnson said early Monday morning.

Some protesters hurled Molotov cocktails at police, and several businesses were vandalized or looted -- despite the Brown family's call for calm.

"Based on these conditions, I had no alternative but to elevate the level of our response," Johnson said.

Officers fired tear gas into a crowd of hundreds of protesters, including children, who were marching toward a police command post despite an impending midnight curfew.

"That is a lie. It was no fight, it was no shots fired," Williams told CNN late Sunday night. "All we did was march to the command center to fall to our knees and say, 'Don't shoot.' And they started shooting."

The clashes kept escalating, with the St. Charles County sheriff's officials saying shots were fired in their direction.

At one point, employees at a McDonald's restaurant locked themselves in a storage room after the store was overrun, Johnson said.

St. Louis County police said most of the crowds had dispersed after the curfew went into effect at midnight. The curfew will end at 5 a.m. (6 a.m. ET).

But the anxiety remains. The Ferguson-Florissant School District canceled classes for Monday.

"Information we received from officials on the scene late Sunday evening has contributed to concerns we have about children walking to school or waiting for buses on streets impacted by this activity," the school district said on its Facebook page.

Brown, an unarmed black teenager, was shot dead August 9 by a white police officer. He was shot at least six times, including twice in the head, according to the preliminary results of an autopsy that his family requested.

Family attorney Anthony Gray said the independent autopsy conducted Sunday found that Brown was shot twice in the head and four times in the right arm -- all to the front of his body.

Last week, the St. Louis County police department said an original autopsy found that the teen died of gunshot wounds. But the department wouldn't say how many times he was shot or any other details.