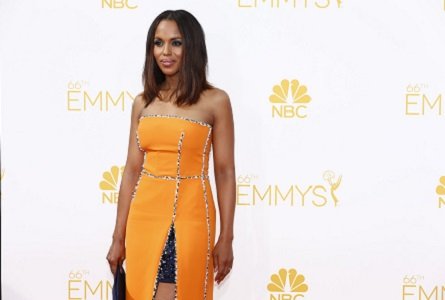 Kerry Washington on the red carpet of the 2014 Emmy Awards in Los Angeles on Monday, August 25, 2014. Jeremy Freeman/CNN

(CNN) — The Emmy Awards will never be confused for the MTV Video Music Awards -- especially when they air on consecutive nights.

It's status quo versus cutting-edge cool. Even when Hollywood lets its hair down, it's on the tame side.

Still, host Seth Meyers did his best to liven up the proceedings. And the 66th Primetime Emmy Awards that aired Monday night did offer up some memorable moments.

Meyers teamed up with "Billy on the Street star" Billy Eichner to dash around the streets of New York and bombard pedestrians with random pop culture questions.

During a frenetic five minutes, the twosome tackled Emmy snubs, challenged people to name an Emmy nominee and generally terrorized unsuspecting New Yorkers. Then there's the collection they took up for the cast of the "Big Bang Theory."

"Why is the Emmys not just @billyeichner doing that for three hours?" tweeted actress Anna Kendrick.

Remember when TV theme songs meant something? "The Brady Bunch." "Gilligan's Island." You got a catchy tune and the plot, all in 30 seconds.

Nobody does that anymore. Nobody, except "Weird Al" Yankovic, who skewered everything from "Mad Men" to "Game of Thrones" in a medley with choice lines like, "Jon Hamm's never won an Emmy/ Oh who cares? He's still Jon freaking Hamm."

Remember when John Travolta, for some inexplicable reason, mangled Idina Menzel's name as 'Adele Dazeem'? Gwen Stefani had one of those while presenting the Emmy for Outstanding Variety/Music/Comedy Series to "The Colbert Report." Or, as she put it, "The Colbort Report." Fortunately, Maroon 5's Adam Levine was there to quickly correct her.

Your heart had to break for Billy Crystal, the sometimes Oscar host who delivered a heartfelt tribute to his buddy, Robin Williams. "It is very hard to talk about him in the past because he was so present in our lives," he said of the actor, who was found dead of an apparent suicide earlier this month. Crystal spoke fondly, touchingly for nearly five minutes. The night before, the VMAs paused to remember Williams ... for a mere 23 seconds.

5. Bryan breaking bad with the Veep

The gag that paid off big time last night was when "Breaking Bad" star Bryan Cranston planted a long, wet one on Julia Louis-Dreyfus as she headed to the stage to accept her Emmy award?

When the stars were presenting an earlier award, they had a running gag that Louis-Dreyfus couldn't remember that Cranston was a guest star on "Seinfeld," and that the pair even made out on camera.

Not to be brushed aside, Cranston blocked her as she walked toward the stage to accept her trophy for best actress in a comedy series for "Veep." He swept Louis-Dreyfus into a passionate embrace until Jimmy Fallon forced them to separate.

"Yeah, yeah, he was on 'Seinfeld,'" she quipped, while the camera panned to Cranston wiping the lipstick off his lips.

CNN's Saeed Ahmed and Dorrine Mendoza contributed to this report.