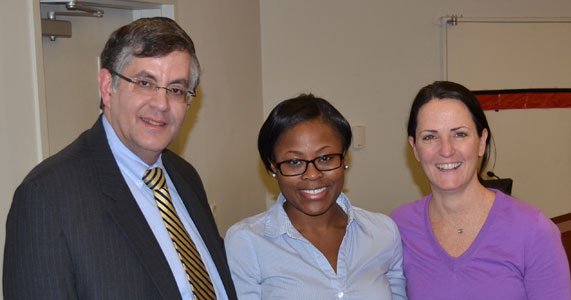 When she was a little girl growing up in Guyana, former Maryland resident Tiffany Murray watched with wonder as her grandmother prepared traditional plant-based remedies to treat an aunt who had polio. She remembers imitating her grandmother’s behavior, grinding Hibiscus flowers to make medicine for her dolls.

“Witnessing the healing process fascinated me,” she said. “Like my grandmother, I wanted to be a healer, and I envisioned myself one day helping to cure people around the world.”

Years later, what Murray envisioned would become a reality.

Murray is enrolled at Touro College of Pharmacy (Class of ’15) in New York City, and this year her outstanding accomplishments there have earned her a CVS Caremark Charitable Trust Pharmacy Scholarship. The grant is awarded to future promising pharmacists as they complete their education.

Dr. Zvi Loewy, interim dean of the pharmacy school, and Dr. Maureen Sullivan, chair of the Dept. of Pharmacy Practice, presented the award to Murray. “I am delighted that Tiffany was awarded a scholarship from CVS Caremark,” said Dr. Loewy. “The CVS scholarship recognizes the contributions that Tiffany has made to student pharmacy organizations and her community involvement.”

At Touro, Murray became chapter president of the American Pharmacist Association’s Academy of Student Pharmacists (APhA-ASP) where she was involved in several community outreach projects, including Operation Immunization, Generation Rx, Women as the Face of AIDS Summit Health Fair, and the YMCA Emblem Health Fair.

Murray said she valued her experiences with Operation Immunization and the Generation Rx programs in particular, “because I learned the importance of the pharmacist’s role within the community” and that she is not someone who works “just behind the counter.”

At Operation Immunization, students and members collaborated with local pharmacies to educate patients on the importance of being immunized— urging parents to update their children’s immunization records and distributing educational materials about immunizations within New York City’s Harlem neighborhood. Residents also received flu shots and were counseled on their blood pressure readings.

Generation Rx is a program at the Touro College Chapter of the APhA-ASP that is dedicated to educating high school students about prescription drug abuse through interactive presentations, educational literature and feedback from participants about the program’s effectiveness.

Murray lived in Silver Spring, Maryland from the age of 13. After high school, she enrolled at Stevenson University at the Owings Mills campus in Baltimore, where she received a Bachelor of Science in chemistry. At Stevenson, she says, her education and experiences “were extremely gratifying,” and equipped her “with the necessary skills and knowledge to excel in my post graduate education.”

Murray says she has “a plethora of great memories,” about living in Baltimore, including the campus’s close proximity to the Baltimore Ravens training camp. “A lot of students like me would visit the camp to watch the players train,” said Murray.

Baltimore was also a hub for food and culture for Murray. “Down the hill from the dormitories was a Bonefish Grill restaurant, which, from my perspective, has one of the best crab cakes in Baltimore.” She enjoyed visiting the Baltimore Inner Harbor and the Baltimore Museum of Art, and area nightlife. “I still recall attending The Comedy Factory, which was a great way to unwind with friends especially after an intense school week. I had a lot of great memories living in Baltimore; it is certainly a multifaceted city with a diverse culture,” she said.

While living in Maryland, Murray also volunteered at the outpatient pharmacy at the National Institute of Health in Bethesda, while working at a CVS pharmacy.

Murray said she enrolled at Touro because its unique, four-year program, which couples two years of classroom with two years of hands-on clinical experience and strong public health emphasis, “will tremendously assist me in my professional practice.”

After she graduates, Murray says she plans to pursue a career in retail pharmacy and hopes to be “a caring and vigilant pharmacist who looks out for the best interest of my clients.” Ultimately, she says her goal is to make a difference back in Guyana by opening her own pharmacy there, one that will “provide the best consulting services for communities in need.”