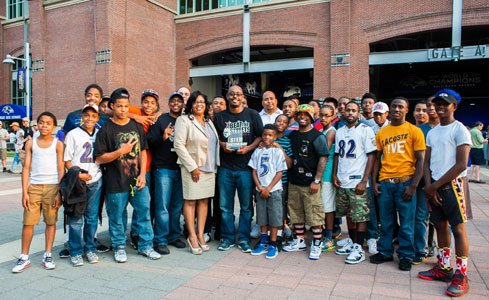 Lydell Henry founded “Beat the Streets,” an after-school program that combines amateur wrestling, character development and tutoring for Baltimore’s youth. He is pictured with Allstate owner Theresa Scott (front center) along with several youth who participate in the program. Allstate has joined forces with Chef Gerry "G" Garvin to help spread the word about Give It Up for Good, and to encourage individuals to submit stories, tweets, videos, and pictures of the good things that are happening in their communities. (Courtesy Photo)

BALTIMORE — Chef Gerry "G" Garvin grew up in a large, single-parent family. The celebrity chef, restaurateur and TV personality recalls how people would help his mother during tough times. Garvin has never forgotten his humble beginnings. Through his One Bite Foundation, Garvin inspires children in the Culinary Arts, and addresses issues such as child obesity, domestic violence, homelessness, and hunger. Garvin has also teamed up with Allstate for its Give It Up for Good Campaign.

The national campaign was launched by Allstate in 2013, and spotlights “Champions for Good,” whose remarkable good deeds often go unnoticed. The insurance giant has joined forces with Garvin to help spread the word about Give It Up for Good, and to encourage individuals to submit stories, tweets, videos, and pictures of the good things that are happening in their communities.

“When I was growing up, there were many people who helped my family,” recalled Chef Garvin. “I want to return the favor, and provide resources to those in need as much as I can. That includes clothes, cash, or just making sure someone has a place to sleep. I am very much involved, and this is very important to me.”

Chef Garvin started his culinary career in his hometown, Atlanta, Georgia at the Ritz Carlton-Downtown, as the youngest line cook in the gourmet dining room.

He went on to open his signature restaurant, G Garvin’s, where he continued to cater to and host high profile dinners for individuals such as Former President Bill Clinton and actress Halle Berry.

Garvin is now in the homes of millions though TV One’s Turn Up the Heat with G. Garvin. His increasing popularity earned him his second series on the same network entitled G. Garvin: The Road Tour. Eventually, Food Networks’ Cooking Channel tapped him to host the series, Road Trip with G Garvin. This show is currently in its second season.

Garvin shared his story of how his 'hot' cooking career got started.

He added, “I never thought cooking would take me around the world, to The White House, and cooking for so many people. However, I also have an ambition to accomplish more. It is a constant goal of mine to be a better chef, father and friend.”

Chef Garvin said he would do all that he could to encourage individuals to share their stories with Allstate. “Allstate's Give It Up for Good Campaign is very important,” said Garvin. “We encourage and want people to be a part of it. We want to hear their stories.”

One of Allstate's Champions for Good is based in Baltimore. Lydell Henry was recently honored for his ongoing commitment to his community with a special trophy presentation at Gate A, just outside of M&T Bank Stadium. Henry was honored on Thursday, August 7, 2014 during a surprise trophy presentation prior to a Ravens’ pre-season Ravens game.

Henry founded Beat the Streets, an after-school program that combines amateur wrestling, character development and tutoring for Baltimore’s youth. Henry attended the game with fellow Beat the Streets representatives and a number of the children who have been mentored through the program.

This Labor Day, Henry will attend the Allstate Tom Joyner Family Reunion in Orlando as a special guest alongside his fellow Champions For Good.

To submit stories about someone making a difference in your community or for more information, visit Allstate.com/GiveItUpForGood