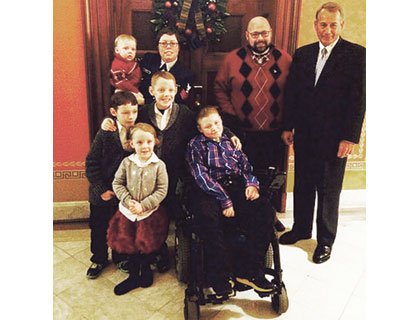 Aaron Urban, front, poses with his four siblings, his parents, Jeremy and Leisha, and Speaker of the House John Boehner before the ceremony to light the 2014 U.S. Capitol Christmas Tree. Aaron, who is battling brain cancer, was given the honor after efforts by Make-A-Wish Mid-Atlantic, who also is helping to fulfill his wish of spending the holidays in New York City. (Photo courtesy Make-A-Wish Mid-Atlantic)

A foggy mist did not deter a crowd of onlookers, politicians and U.S. Forest Service employees as a 10-year-old Maryland boy in a wheelchair enveloped by warm blankets flipped the switch to light the 2014 U.S. Capitol Christmas Tree on the West Front lawn of the nation’s Capital.

C-SPAN recorded the event, including the moment when Speaker of the House John Boehner handed the controls to Aaron Urban, who flipped the switch on the 88-foot white spruce from Minnesota.The ceremony culminated more than a year of work to find, select, harvest and transport the tree found on the Chippewa National Forest. Children from that state made more than 10,000 ornaments – many of them dreamcatchers in the tradition of the Leech Lake Band of Ojibwa.

USDA Under Secretary Robert Bonnie told the audience the tree is “a good reminder to all of us of the importance of conserving our forests and our natural resources. The tree is also a wonderful example of the American can-do spirit as each year partners and hundreds of volunteers contribute thousands of hours to help transport the tree from one of our national forests to the Capitol.”

The Chippewa, the first national forest east of the Mississippi River, is at the headwaters to the 2,350-mile mighty river. The Mississippi is part of the fourth largest watershed in the world, covering 1.2 million square miles over all or parts of 31 states and two Canadian Provinces. Bonnie said the forest contains 400,000 acres of wetlands and lakes and provides habitat for Canada lynx, Sandhill cranes and the largest breeding population of bald eagles in the lower 48.

“The forest has also been home to Native Americans for 10,000 years and contains outstanding cultural resources,” Bonnie said. “That makes today’s celebration even more important because the Leech Lake Band of Ojibwa has played a critical role in partnering with the Forest Service to bring the tree here. Indeed,

I’m told there are members of the Leech Lake Band here today who were here as children in 1992 when a tree from the Chippewa National Forest was last selected as the Capitol Christmas Tree.”

Sen. Amy Klobuchar, the senior senator from Minnesota, said the lesson of the year is the immense pride and enthusiasm shown by adults and children for sharing “this not so small piece of Minnesota.”

“It is so fitting that our state is providing this huge Christmas tree from the forest near Bemidji, Minnesota,” she said. “You should know that Bemidji is also home to a huge statue of Paul Bunyan and Babe the Blue Ox. And here’s a fun fact: It would actually take more than four Paul Bunyan statues to reach the star on that tree.”

But it was Aaron Urban’s brief yet moving appearance at the ceremony that topped every dignitary and foot of the giant white spruce.

Aaron, of Linthicum, Maryland, learned on Monday that he would travel to the Capitol to take part in the ceremony thanks to the efforts of Make-A-

Wish Mid-Atlantic.The ceremony was a surprise addition to his special wish: to spend Christmas in New York City. Aaron is battling brain cancer and is, as Boehner said, the example of what the holiday season is about – spending time with loved ones, giving to others and taking part in traditions.

While in New York City, he will visit all the museums, the 85-foot tree at Rockefeller Center, Statue of Liberty and the giant Toys R’ Us in Times Square. A huge fan of the “Home Alone” movies, Aaron got the idea for his special wish after watching “Home Alone 2: Lost in New York.”

Aaron, the oldest of five children, is the son of Jeremy and Leisha Urban. Leisha Urban is a member of the U.S. Coast Guard.