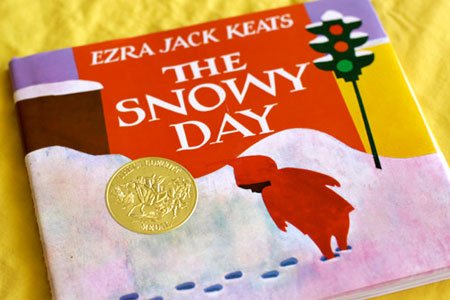 The cover of Ezra Jack Keats “The Snowy Day” Published in 1962. (Courtesy Photo)

“Writing a book with a black kid as a hero turned my life around.” —Ezra Jack Keats, 1963

While cleaning out a seldom, used closet, I spied my old steamer trunk. It was brand new years ago, when my mother filled the trunk with everything she thought I needed for my freshman year at Frostburg State College. Its once shiny brass lock has aged to a fine verdigris, a mossy green color found on old copper fixtures. The two sturdy leather handles show signs of wear, but are still functional. Inside the contents are in excellent condition. After college I turned the trunk into a treasure chest and filled it with illustrated books and other keepsakes from my childhood.

I cherish one book over the others, “The good Earth” by Pearl S. Buck. My fifth grade teacher and neighbor Mrs. Tilghman, who gave it to me while I was home, quarantined with chicken pox. I have never forgotten her inscription “A good book” she wrote “can be a faithful companion. It stands ready to share its stories, and keep you company when your friends cannot visit. Get well soon, Mrs. Tilghman.

My teacher’s words revealed to me the power of books. Reading helps me unravel life’s mysteries, “travel” the world and entertain myself. This holiday season I ask Education Matters readers to consider giving a book (or two) to a child on your shopping list. The pleasure of reading may stay with a youngster long after new toys have been cast aside and a video game’s novelty fades away. You can turn a book into a truly treasured memento by writing a heartfelt inscription on the title page, and adding the date of the gift.

Knowing the book’s provenance, and the author’s background is an excellent way to make reading the story a learning experience. One of my favorite authors is Ezra Jack Keats. His book “The Snowy Day” was credited with breaking the color barrier in mainstream children’s publishing in 1962. His Caldecott Award-winning book (the highest annual honor bestowed upon a story” written and illustrated for children) “is beloved by several generations of readers and has earned a place in the pantheon of great American children’s literature” writes the Huffington Post’s Black Voices.

Ezra Jack Keats was born Jacob Katz to Jewish immigrant parents in 1916. His biography written by Dean Engel and Florence Freedman states: “He became interested in art at any early age. His mother encouraged Keats' talent, but his father seemed only to criticize Keats' ability. It was thought the father feared his son would never earn a living as an artist. However, after his dad passed away Keats learned his dad was truly proud of his son’s accomplishments.

In his Caldecott Medal speech in 1963, Keats shared the experience of sorting through his dad’s papers and discovering how his father really felt. "I found myself staring deep into his secret feelings. There in his wallet were worn and tattered newspaper clippings of the notices of the awards I had won. My silent admirer and supplier, he had been torn between his dread of my leading a life of hardship and his real pride in my work.”

Although Keats won three scholarships to art school, he was unable to attend. After his father’s death he worked to support his family by day and took art classes at night. Keats’ professional career began at Fawcett Publications, illustrating backgrounds for the Captain Marvel comic strip.

“My Dog is Lost,” Keats' first attempt at authoring a children's book, was published in 1960. The main character is a Puerto Rican boy named Juanito who has lost his dog in New York where he meets children from different sections of New York such as Chinatown and Little Italy.

Next, Keats who was innovative in his use of minority children as central characters decided to create a book featuring a little boy named Peter, who was inspired by an article he clipped from Life magazine in 1940. This decision became in his words the “experience that turned my life around—-working on a book with a black kid as the hero.”

None of the manuscripts I'd been illustrating featured any black kids— except for token blacks in the background. My book, [The Snowy Day] would have him there simply because he should have been there all along. Peter appears in six more books growing from a small boy in The Snowy Day to adolescent in “Pet Show.”

In 1983, Ezra Jack Keats died from a heart attack, leaving the world a wonderful collection of beautiful books to read and share with a new generation of children.

Jayne Matthews Hopson writes about educational matters because in the words of Epictetus, former slave and Greek Stoic philosopher “only the educated are free.”