Paying it forward during the holidays 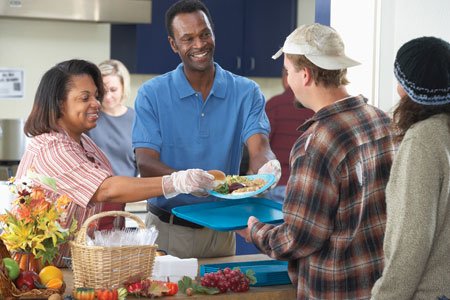 Pay it forward during the holidays by volunteering.

Phil and Mary Sue are generous hosts. Thanksgiving is their special time with family, but they regularly invite "orphans"— people like my wife and me who have no other place to go. This year, we looked forward to joining Phil and Mary Sue's family and friends at their home. They were expecting seventeen guests. No Indians on the guest list this year, but Phil says he will let the occasional Australian stand in for them.

On Monday of Thanksgiving week, however, Phil got word that his 98-year old mother had had a stroke. Mary Sue was already in Florida, helping out with Phil's mom when he was summoned to her bedside.

Soon, it was clear they would not be returning for the holiday. Bravely, Phil's daughter, Katie, husband Rob, her brother, Ben, and his girlfriend, Mel, pledged to carry on in the parents' absence.

By Wednesday morning, it was clear that our Thanksgiving feast was in jeopardy. My wife, Kathie, and another local guest, Dorothy, stepped in to make Thanksgiving a moveable feast. We'll have Thanksgiving dinner at our house, Kathie announced, and invite our hosts' family and friends to join us. The biggest challenge was to find, in the little town of Annapolis and on the day before Thanksgiving, a 25-pound fresh turkey. No time for defrosting a frozen one.

We gathered together on the great day. We included Phil and Mary Sue by cell phone in the Grace we said before our meal. We had never met several of the guests before. Ben's friend, Mel, is from England. This was her first American Thanksgiving.

When Phil's mother passed away peacefully, and he and Mary Sue returned, they thanked us for taking in their guests. Kathie then told them the story of the time in 1989 when her own mother passed away. Edith May had died on December 19th. Resolving to fly across the country to do a proper memorial service in Takoma, Washington, our family had to fly home on Christmas Eve.

Our United Airlines pilot teased our young children, telling them we were in a race with a little sleigh and eight tiny reindeer. We arrived back at Baltimore-Washington International Airport at 2 a.m. on Christmas morning.

As we drove home, Kathie said there was no time to prepare for Christmas dinner. No stores would be open on Christmas Day. We'd have to eat at Bethesda Naval Hospital, where she was in charge of the food service. That would have been fine, since the Navy goes all out to make Christmas special for those confined to the hospital and those on duty. But it wouldn't have been the same as being at home.

When we arrived at our house, what to our wondering eyes should appear! We found our refrigerator stocked with turkey, stuffing, and all the trimmings of a prepared Christmas dinner. The dining room table was set and everything made ready for the holiday meal.

When she returned next day to the hospital and thanked her staff-officers, enlisted, and civilians-for all that they had done, Kathie asked them what we could do to repay their extraordinary kindness. They had made this Christmas one we would never forget, Kathie told them.

"You don't have to repay us for anything," said Elaine, my wife's deputy. "Do something like this for someone else." Now, we call it paying it forward. And so, this Thanksgiving, we did.

Losing a beloved parent is always hard, and especially so during the holidays. But bearing one another's burdens is what we do. And it is at times like this that we come closest to the true meaning of Christmas: We are commanded to love one another as He has loved us.

Robert Morrison is Senior Fellow for Policy Studies at the Family Research Council in Washington, D.C.