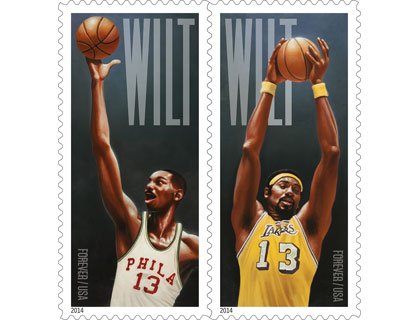 The icon whose dominance literally changed the rules of basketball returned to center court Friday, December 5, 2014, to receive a stamping ovation when he becomes the National Basketball Association’s (NBA) first player to be immortalized on a U.S. postage stamp.

NBA players Julius Erving and Wali Jones were among those dedicating the Wilt Chamberlain Forever stamps during at halftime when the Philadelphia 76ers hosted the Oklahoma City Thunder. A video of Chamberlain’s accomplishments will highlight the ceremony. All 50 million stamps are available nationwide.

“When it came to determining the first NBA player to be honored on a stamp, Wilt Chamberlain was a slam dunk,” said U.S. Postal Service General Counsel and Executive Vice President Tom Marshall. At 7ft. 1 in., ‘the Big Dipper’s’ physical stature, athleticism and talent helped him to dominate the NBA and to put an indelible mark on the NBA record books. We decided to portray his dominance on the court with two towering Forever stamps depicting Wilt in the uniforms of two of the NBA teams for which he played. Each is twice the size of the original Forever Stamp— the Liberty Bell. And what better place to dedicate Wilt’s stamps than his hometown— the City of Brotherly Love.”

A special dedication ceremony took place at the Mass Mutual Center during the University of Mass. vs. Florida Gulf Coast Game on Sunday, December 7, 2014, in Springfield, MA. Another ceremony was held on Wednesday, December 10 at Philadelphia’s Overbrook High School. Many of Chamberlain’s former teammates attended.

In addition to Erving and Jones joining Marshall in the dedication ceremony, were Chamberlain’s sisters Barbara Lewis and Selina Gross; 76ers Ambassador of Basketball World B. Free; Philadelphia Sports Hall of Famer and sports radio personality Sonny Hill; and, 76ers Director of Statistical Information Harvey Pollack, who holds the distinction as the only individual working for the NBA since its inaugural 1946-47 season. Pollack also kept score during Chamberlain’s 1962 record-breaking 100-point game. He also made the sign Chamberlain held in the famous post-game photo.

The halftime ceremony featured a special tribute video and stamp unveiling using the team’s state-of-the-art court projection system. Throughout the night, the Sixers celebrated the life and legacy of the legendary Chamberlain with videos during breaks in play.

The Wilt Chamberlain Limited Edition Forever stamps, available in sheets of 18 stamps, will always be equal in value to the current First-Class Mail 1-ounce price. Customers may purchase the stamps at usps.com/stamps, the Postal Store, at 800-STAMP24 (800-782-6724) and at Post Offices nationwide or visit ebay.com/stamps to shop for a wide variety of postage stamps and collectibles.