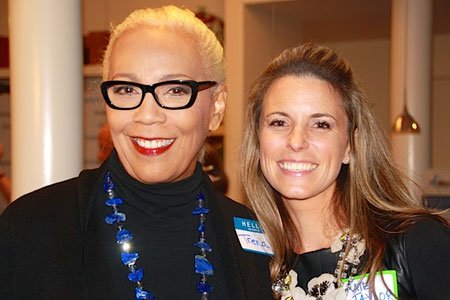 INNterim Housing Corporation (INNterim) is the only program in the County that provides up to 12 months of stable housing with case management and access to supportive services for women and their children.

On any given day, INNterim reportedly receives anywhere from five to 10 calls from women seeking shelter and refuge for a myriad of reasons, such as: job loss; evictions; domestic violence; chronic homelessness and other social issues.

After twenty years of meeting the high demand to serve individuals in the Baltimore County region, INNterim Housing Corporation’s transitional shelter is in need of repairs, new appliances and furniture. On October 16, 2014, approximately 180 people attended a first-ever invitation only fundraiser that brought in over $100,000.

Edith “Bunny” Bernstein, president of INNterim’s board of directors, and her husband, Alan Bernstein, hosted the successful event. Susan Wolman, another financial supporter and volunteer, embodies the INNterim spirit to assist women and children in need. Wolman is a retired licensed social worker who has worked as a lead board member since the mid-1990s.

“The board of directors made the event a huge success,” V. Lisa Williams, executive director of INNterim said. “I have never experienced a board of governors who are so dedicated and concerned about improving the lives of homeless women and their children. They give of their time, treasures and talents endlessly, visiting several times a week and calling almost every day.”

Williams manages a team of experienced individuals who provide services through INNterim's transitional housing shelter in Pikesville, and INNterim Gardens, which consists of 10 apartments. Mothers and their children who reside in INNterim's transitional shelter share communal spaces but are given a private bedroom. A sister residential program— INNterim Gardens— is designed to serve chronically homeless families with mental or physical disabilities.

“Individuals and their children are referred from county shelters and the Department of Social Services (DSS). Families are required to engage in intensive case management with the ultimate goals of stabilizing the family by meeting the immediate basic need for housing and food; increasing income through employment or access to entitlement benefits; and providing linkages to services that remove barriers to re-housing and self-sufficiency. INNterim works diligently to promote social justice by helping these disadvantaged individuals to increase their assets so that they are empowered to live

Two single mothers— the late Gerry Buchanan and Nancy Thomas— experienced challenges while raising their children alone. The pioneers founded INNterim in 1994. The nonprofit organization has been responsive to the changing face of homelessness, which has changed nationally and locally.

“A person may have come from a middle class background with a college degree, a two parent household, had a spouse, a job, a home, a car, paid vacations and several family members and friends. One day, their world turned upside down due to a job termination, a lay-off, a divorce or a serious health condition that prevented them from working and suddenly they could no longer pay their mortgage, car payment or feed their children and were living off of their credit cards. It is hard for the public to believe that the homeless is no longer the person who is the visible drug-addicted, mentally ill, scruffy creature walking down a street with a cardboard sign saying, “Help me. I’m homeless,” Gates said.

INNterim will host a Community Connect Holiday Drop-In on Wednesday, December 17, 2014 from 11 a.m. to 6 p.m. Community friends are invited to take a tour and spread holiday cheer. INNterim is located at 112 Sudbrook Lane in Pikesville, Maryland. For more information about INNterim, call 410-486-8175 or visit www.innterim.org.