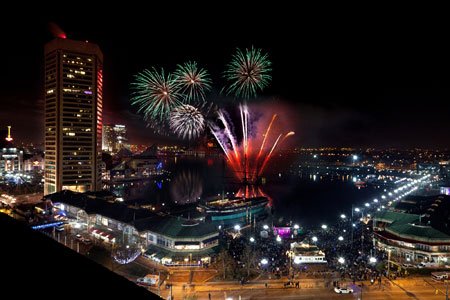 Starting at 9 p.m. Baltimore-based band “Under The Covers” will perform a unique blend of high-energy Top 40s covers at the Inner Harbor Amphitheater, located at Pratt and Light streets. Following the performance, Mayor Stephanie Rawlings-Blake and event-goers will count down to the New Year.

At the stroke of midnight, colorful fireworks and lights fill the sky above downtown Baltimore. The annual Baltimore’s New Year’s Eve Spectacular is presented by Mayor Stephanie Rawlings-Blake and produced by the Baltimore Office of Promotion & The Arts. Additional support is provided by Visit Baltimore, Southwest Vacations, Horseshoe Casino Baltimore and The Gallery. WJZ-TV 13 is the media sponsor.

The fireworks and light show are produced by Image Engineering.

Engineering is comprised of a team of artists, videographers, engineers and creative thinkers at its headquarters in Baltimore. Since 1979, they have completed over 500 projects in the field of creative multimedia shows for clients such as Rihanna, Jay Z, America’s Got Talent and multiple professional sports franchises in the NFL, NBA and NHL.

For the full experience, residents and visitors can view the fireworks from along the Inner Harbor promenade. The show can also be seen from the neighborhoods of Federal Hill, Locust Point, Canton, Harbor East and Fell’s Point.

In addition, WJZ-TV 13 will broadcast the celebration at 11:30 p.m. on CBS Baltimore.

Maryland Transit Administration (MTA) Metro Subway, Light Rail and Bus are the best ways to get downtown for the holiday celebration. Metro Subway and Light Rail service is extended for one hour after the event. For information on MTA services and schedules, visit: www.mtamaryland.com.