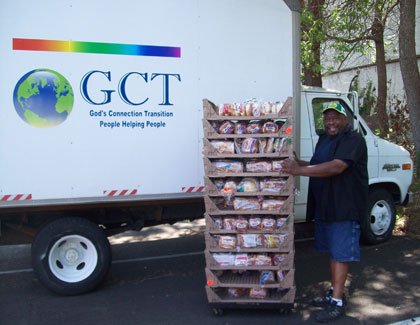 Arnold Harvey and his wife, Theresa Harvey started Through God’s Connection Transition (GCT), a nonprofit that feeds people in need.

Arnold Harvey, a 58-year old Gaithersburg, Maryland based sanitation worker and his wife, Theresa Harvey, exhibit kindness and generosity year-round. Through God’s Connection Transition (GCT), a nonprofit that they founded in 2007, the couple and several family members touch the lives of those in need. They distribute food and household items through their warehouse located in Gaithersburg. This holiday season, GCT expands their community work to reach vulnerable populations in Anne Arundel County and Baltimore, by providing toys and Christmas dinners.

Around 2006, Arnold, now a 24-year employee of Waste Management Inc., began his morning shift at 2 a.m. working in Silver Spring and around the District line. The father of five noticed men, women and sometimes children sleeping in unexpected places like alleys, doorways, under stairs and behind trash cans. Arnold, an Army veteran who served in the military for eight years, began offering encouraging words. While building friendships, Arnold discovered that the majority of homeless people he encountered experienced hardships, during the first signs of the economic down turn. Harvey and his wife took action.

“One day we said we’re going to start giving out sandwiches. The shelter wouldn’t open until a certain time of night and would be closed until that evening or morning. They were at the mercy of whoever would feed them or until they were able to go back to the shelter. We made it a habit of giving out sandwiches in evenings, several times a week or on weekends. If it was cold on Sunday mornings, before we did anything, we would take coffee oatmeal, coats, blankets, coffee—whatever we had,” Arnold said.

In late 2007, the Harveys sold their stocks, dipped into their 401(k)s and took out loans to buy goods and assist strangers who had fallen on hard times. They organized a food pantry in their garage before moving to a small building. When GCT obtained their 503(c)(3) nonprofit status in 2009, businesses and individuals started noticing their work and mission. An estimated 5,000 families are assisted monthly through GCT and their partners and referral network consisting of 13 churches, shelters, senior homes, pantries and soup kitchens.

Families who need food to tide them over for a few days are often local, although many people seeking help come from various locations.

“We do an interview by appointment with them to see if they’re eligible to come in and shop once a month. They receive up to ten bags of items each time they come in and shop. It’s set up as a grocery store with meats, vegetables when available, diapers, shampoo, lotion, dish soap, baby food…clothing. It’s got everything in it,” Arnold said. “Our daughter, Angela Harvey, works for us. She put her career on hold as a journalist, after graduating from the University of Maryland in 2013, and runs day to day operations as the operations manager. She wants to make sure that the organization is set up for years to come. My son-in-law, Raphael Clement, is the director of operations. We’re so thankful.”

Theresa and Arnold work full-time jobs. Arnold delivers items and organizes GCT’s warehouse on his only day off. Arnold’s compassionate nature that sparked a movement to help others is partially tied to his own upbringing.

“I grew up with a divorced mother of 12 in the inner city of Kansas City, Missouri. We stood in government food lines. We lived in houses that we shouldn’t have, but it was all our mother could afford as a single parent.”

The late George W. Brown married Arnold’s mother, the late Beatrice Brown. George reportedly moved his new family to the suburbs and instilled a work ethic into his stepchildren, several of whom elevated themselves through military service.

“I made a promise to God. ‘If you see us through this, I will do whatever I can to help anybody else,’” Arnold said.

GCT is currently working on obtaining grant funding. To learn more about the nonprofit or to make a donation, visit: www.gctservingpeople.org or by calling 301-355-5144.