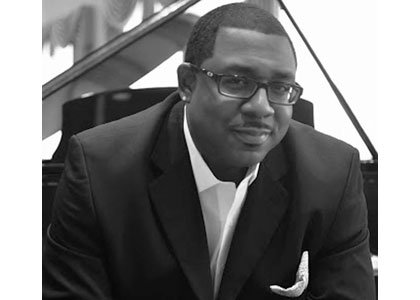 “Social media is how I promoted the CD (It’s Just Music) and how it was able to chart so fast. No one was aware that it was coming. Dec. 9, 2014 at 12:01 a.m., we bombarded social media. It was everywhere. People woke up and downloaded it. People who supported my music in the past are really surprised at the versatility,” Ward said. “It’s a good solid project that I feel could appeal to anybody. It’s something on this CD for you, if you just like music. That’s why I entitled it ‘It’s Just Music.’ ”

The 43-year-old son of Dr. Ronald Lee Ward Sr. and Patricia Ward grew up in Riverdale, Maryland. Most of the family migrated to Anne Arundel County in 1990. Along with his sister, Latonya Harrison, Ron began taking piano lessons at the age of 14. His music teacher informed his parents that he was musically gifted. Today, Ron is a singer, songwriter, music producer and studio engineer. The professional musician works as the minister of music at Asbury Town Neck United Methodist Church, located in Severna Park, where Rev. James A. Bishop Sr. serves as pastor. Ron’s father was formerly the pastor of the church for 21 years.

“I’m trying to transition into another phase of music that would still be appropriate for me to create as a minister of music. I get my biggest joy on Sunday mornings playing in church. If something transpired, I would be ready for that, but I’m perfectly happy being an independent artist right now,” Ron said.

‘It’s Just Music’ is a fusion of homegrown talent and friendship. Dobson and Ward share a strong bond of Christian fellowship and music, although SMUV members have all kept in touch. Dobson, now a teacher working in Montgomery County, was raised in Annapolis and serves as the worship leader at Asbury Town Neck United Methodist Church. He provided background vocals on three songs for ‘It’s Just Music.’ Art Sherrod Jr., a jazz saxophonist, co-wrote two songs and played saxophone on the CD. Bill Pettaway, described as Timberland’s business associate, played guitar on several tracks. DorRay Casey sang background vocals the track, ‘Oh How I Love Jesus.’

Over the course of fifteen years, Ron has been civically engaged in his community, while working in the music field. He served as a volunteer basketball coach at Annapolis High School, Archbishop Spalding High School and Arundel High School.

“I never felt that I had to leave the area to make it. I feel like if you make good enough music, eventually someone will hear it. I know some people say you have to go to N.Y., but with the Internet and social media, it puts you in those places. It’s more of an independent artist’s game right now instead of a major label’s.”

You may purchase digital versions of ‘It’s Just Music’ on iTunes, Amazon and Google Play. Cdbaby.com offers digital and hard copy formats of Ron’s CD. In 2015, the music artist plans to perform with an accompanying band that he assembled. Ron’s Facebook artist page is https://www.facebook.com/pages/Ron-Ward-Jr/ 1508015639476175? pnref= story.