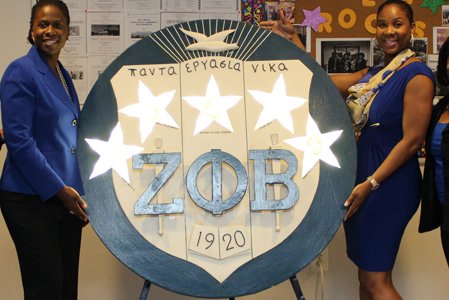 BALTIMORE — The year 2013 was a milestone in the history of Zeta Phi Beta Sorority, Alpha Zeta Chapter, the oldest and first graduate chapter of the sorority. Alpha Zeta Chapter celebrated 90 years of providing services to improve the human condition in the Baltimore Metropolitan area. Five dynamic women who were graduates of Morgan State University founded the Chapter.

Alpha Zeta Chapter has provided youth development programs (Zeta Youth Auxiliaries) to prevent juvenile delinquency; after school tutorial programs to improve academic performance of students; pre-natal education and baby layettes (The Stork’s Nest) to low income pregnant women to help prevent pre-term births and infant mortality; toiletries to homeless shelters and suits for women at the House of Ruth (Suited for Work) who are searching for jobs; and more than $100,000 in scholarships over the years to assist academic achievers who graduate from the Baltimore City Public School.

Internationally, the chapter has purchased a well in Ghana to provide clean water to an entire village and has adopted an orphanage in Cape Town, South Africa where they provide clothing, supplies and money to help sustain more than 150 HIV/AIDS orphans and other children whose families are too poor to care for them. In 2009, the Chapter cut the ribbon to the $2.5 million Center for healthy and active aging in the Park Heights community. Since that time, they have implemented programs to encourage healthy lifestyles for seniors in Park Heights and surrounding areas.

For the year, each of the chapter’s events focused on their 90 years of service. There were four significant culminating events from September 14 through September 21, 2013. The events included the following activities:

• Communitywide health awareness event at the Zeta Center for Healthy and Active Aging.

At both the Grand Reception and the Elegant Anniversary Gala, the Chapter was honored by the presence of Mary B. Wright, International President of Zeta Phi Beta Sorority. Remarks at these events commemorating their 90 years of service were made by Sherl B. Woodland, Chapter President; Jack Young, President of the Baltimore City Council; Joan Pratt, Comptroller Baltimore City; Sharon Green Middleton, Baltimore City Council, 6th District; and several local dignitaries, members of the sorority and other Greek Letter organizations.

Zeta Phi Sorority, Inc., Alpha Zeta Chapter extends their thanks to the community for years of support, as they reflect on their past, and look forward to the future of new discoveries and opportunities to serve humanity.