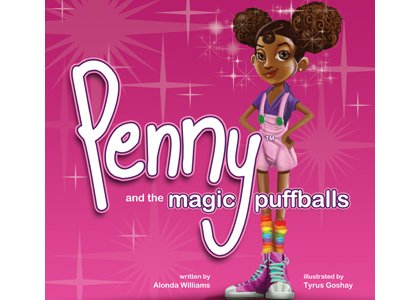 "Penny and the Magic Puffballs" is empowering young girls of color to feel great about themselves, starting with their hair. The new book is about a young girl, Penny, who faces identity issues with her natural hair and often feels sad because her hair isn't straight. When her mom gives her big puffballs, the adventurous magic begins.

"There are so many Penny's in the world, including my daughter," says author Alonda Williams. "I created Penny to empower my daughter to embrace her differences and love herself, just as she is."

"Penny and the Magic Puffballs" is a 32-page book that tells the whimsical story of Penny, and her adventures with her puffballs. Author Alonda Williams credits her daughter's struggles for the creation of Penny's character. She made up bedtime stories about Penny and her magic puffballs to help her daughter relate to someone that looked like her. Her two children loved her stories so much that it became a part of their nightly routine, with new adventures added to Penny's story each night. "I decided to write the book because I knew that my daughter wasn't alone in her struggle. I thought that other little girls would enjoy hearing Penny's story," says Williams.

Parents and children across the nation have welcomed this book; and supporters are steadily joining in on the effort to increase the self-esteem of young girls of color. "Penny and the Magic Puffballs" has been an Amazon best seller and has gained close to 6,000 fans via social media since its early December release. "Penny and the Magic Puffballs" is currently available on Amazon and in a few, local bookstores and hair salons. More information is available at www.pennyandthemagicpuffballs.com.