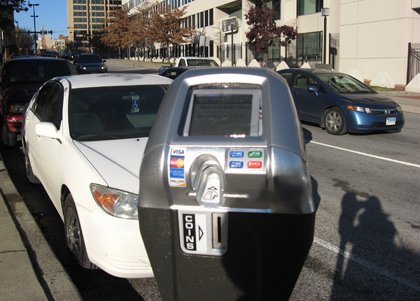 The Parking Authority of Baltimore City has been installing parking meters over the last nine years that meet the Americans with Disabilities Act guidelines. (Above) This vehicle in Baltimore displays a disability placard. According to statistics, nearly 2,000 placards are stolen from vehicles in Baltimore City every year.

BALTIMORE — A new parking program aimed at creating more on street parking availability by curbing the abuse of handicap hangtags is coming to town. The Parking Authority of Baltimore City and the Mayor's Commission on Disabilities have partnered to launch ProjectSPACE.

Set to launch sometime late March or early April, ProjectSPACE requires that all people parking on street pay for parking, including those who possess a disability placard. In addition, the program will reserve more than 200 on-street parking spaces for people with disabilities, making it easier for them to reach their destinations.

“People are looking for the most convenient place to park,” said Little. “If you are like me, you find it extremely difficult to find on-street parking downtown, especially during the day at parking meters. Unfortunately, there are many people who are abusing disability placards to park all day. This is a big issue for people with disabilities who really need to find a place close to their destinations to park.”

He added, “The Parking Authority is committed to find solutions to the parking issues in Baltimore City, and ProjectSPACE will help us to solve this problem.”

According to statistics, nearly 2,000 hangtags are stolen from vehicles in Baltimore City every year, with disability placards thefts skyrocketing as the number one item stolen out of vehicles.

“Baltimore City has seen almost 2000 placards lost or stolen since 2012,” said Dr. Wood. “Cars are broken into and the handicap placards are stolen. It’s also an added expense to the placard owners when other items are stolen from their vehicles. For many years, drug dealers and others involved in the drug trade have been breaking into cars and selling them anywhere from $90 to $150 each.”

Allowing free parking to drivers displaying disability placards and license plates began several decades ago when the Americans with Disabilities Act (ADA) determined that the parking meters at the time were not ADA compliant.

“We are going to be reserving highly accessible parking spaces on-street for parkers with disabilities,” said Little. “They will be lower and will accept credit and debit cards as well as drop in coins without having to turn anything. The turning motion was the catalyst behind the ADA determining that the meters were not ADA compliant.”

He added, “The single space parking meters that we have been installing over the last nine years meet ADA guidelines. In addition, everyone will be required to pay for parking, which eliminates the need to abuse disability placards or steal them.”

Studies show that one-third of traffic congestion in downtown areas are comprised of cars looking for an available parking space. Both Little and Dr. Wood said the new program will address this issue as well.

“There are very few spaces on the street that become available during the day,” said Little. “People circle looking for spaces, which causes traffic congestion. People get frustrated when they can’t find a place to park. People also prefer to park on the street as opposed to a parking garage because garages are more expensive. If people can’t find parking spaces, they may opt to leave. There is no way of knowing how often this happens, but we know it does. As a result, businesses don’t have the opportunity to earn that revenue.”

Wood added, “People with disabilities are looking for equal opportunities. They shouldn’t have to circle the block and see an athletic looking individual jump out of an SUV who has illegally parked in their space. ProjectSPACE will help curtail this issue and also make it easier for them to go about their business and be independent. That’s very important to them. They also want to pay their fair share, get the services that they want, and have equal access to the neighborhoods they want to visit.”

According to Little, Phase 1 of the ProjectSPACE program will include the following boundaries: Martin Luther King, Jr. Blvd. to the West; President St. to the East; Franklin St. to the North and South; and a combination of streets between Conway St. and Key Hwy.

“After that, we will expand to other neighborhoods, which will include Harbor East, Federal Hill, Mt. Vernon, Fells Point and then it will go beyond that to other areas,” said Little. “Those with disabilities are a strong and growing constituency. They are customers too and are major contributors to the life and economy of Baltimore, so it’s important to accommodate them. Ultimately, as a result of this program, we will see more parking available for everyone to use.”