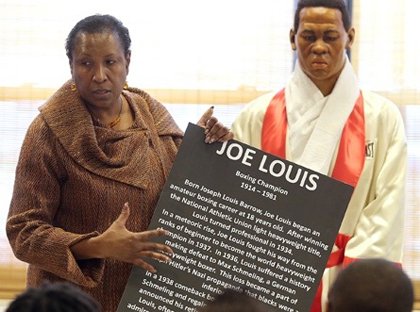 Dr. Joanne Martin has always been concerned about young people, particularly those who are unfamiliar with their roots and whose futures contain perilous obstacles that could land many of them in prison or an early grave.

When Martin and her husband, the late Elmer P. Martin, founded the National Great Blacks in Wax Museum in Baltimore, the couple was convinced that if teenagers and others took an interest, they would be able to use the experience taught by the exhibits to motivate them to succeed in life.

“I remember we recently had a group of young students who didn’t really want to be here, they wanted to go to the ESPN Zone instead,” Martin said. “They really made it known too that they didn’t want to be here and these are the young men that I worry about the most, the 18 to 21-year-olds because they are likely to be either the perpetrator or the victim of a violent crime.”

Martin says she stepped out of character for a moment to let the young men know that she and her husband founded the museum. She wanted them to see and understand the slave ship and lynching exhibits so that they could understand the African American struggle depicted at the museum allowed the students the freedom to go to the ESPN Zone.

“By the end of the tour, they no longer wanted to go to the ESPN Zone. They wanted to see more and for these young men to come in and make the decision that they wanted to learn more was a victory for me,” Martin said.

As many observe Black History Month the museum counts as a way to learn about the roots of African Americans and their unique history.

The museum opened in 1983 and has featured African American historical wax figures ever since.

Martin says that she and her husband created the museum after realizing that many young African Americans felt short-changed because they were black.

“That was something that we wanted to and needed to change,” Martin said.

“Many of our visitors who saw the movie "12 Years a Slave" have commented that they learned much of the history depicted in the film from the National Great Blacks in Wax Museum,” Martin said.

She added that the museum is connected to the film in a most amazing way. One of the film’s stars, Lupito Nyong'o revealed in several interviews that she visited the museum to prepare for her much acclaimed role as Patsey.

“The museum puts a face on history. It brings these people up close and personal,” Martin said. “As a child growing up, I didn’t even know what Booker T. Washington looked like and I’m from the south. He was one of the most well-known and powerful men during his time. I didn’t know what he looked like until I saw the figure in the museum.”

Martin said visitors regularly stream to the museum during Black History Month, its second most productive time of the year. The month of July usually draws the most traffic.

Martin says there are plans to establish a national traveling exhibit so residents of other cities can experience these one-of-a-kind wax figures.

“You’re in a position to teach people history that art, pictures, books or other media won’t allow,” Martin says. “So much history, so much struggle, so many people to be honored, therefore it takes more than a month to be able to do justice to black history.”