Faces of Freedom: The Upper Chesapeake and Beyond 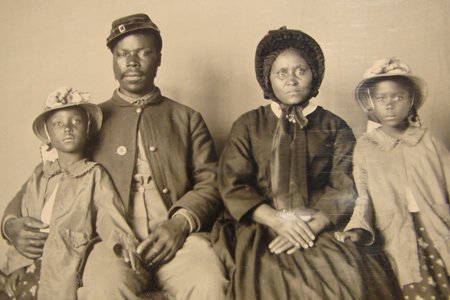 “Faces of Freedom: The Upper Chesapeake, Maryland, and Beyond,”hosted by Hays-Heighe House commemorates the 150th anniversary of the adoption of the Maryland Constitution of 1864, which ended slavery in the state. The project will focus on freedom, slavery and emancipation before, during and after the Civil War. “Faces of Freedom “ opens Wednesday, February 19, 2014 and runs through Saturday, May 10, 2014 at the Hays-Heighe House at Harford Community College located at 401 Thomas Run Road in Bel Air, Maryland. Photo: An unknown family was found in Cecil County. The man in the photo was a member of the U.S. Colored Troops. Photo: Courtesy Library of Congress

“Faces of Freedom: The Upper Chesapeake, Maryland, and Beyond,” featuring a performance, interpretive exhibit, book and film discussions and lectures, opens Wednesday, February 19, 2014 and runs through Saturday, May 10, 2014 at the Hays-Heighe House at Harford Community College located at 401 Thomas Run Road in Bel Air, Maryland.

“Faces of Freedom” commemorates the 150th anniversary of the adoption of the Maryland Constitution of 1864, which ended slavery in the state. The project will focus on freedom, slavery and emancipation before, during and after the Civil War. It will feature individual stories of enslaved persons who freed themselves by running away, joining the Union Army and other methods, and of people who helped freedom seekers and those who worked to abolish slavery.

The centerpiece of “Faces of Freedom” is the play “Susquehanna to Freedom,” performed Friday, April 4, 2014 at 1 p.m. and 7 p.m. in the Chesapeake Theater. The play was written by Dorothy E. King, Ed.D., and examines the role of the Susquehanna River in helping freedom seekers make their way north.

The play, a fictional account based on historic research, focuses on the Underground Railroad and imagines how three enslaved Harford County residents— Harriet Demby, Hull Rice and George Steward— might have followed the Susquehanna on their journey to freedom from Havre de Grace to Cooperstown, N.Y. The play premiered in 2013 at Penn State, Harrisburg, and its Maryland premiere will be at Harford Community College’s Chesapeake Theater. Admission to the play is free, but tickets are required and may be obtained by visiting http://harford.universitytickets.com.

The interpretative exhibit features documented stories of those who sought or fought for freedom. The exhibit will feature panels, artifacts, photographs, manuscripts and original documents (or reproductions) from the Historical Society of Harford County and other institutions and private Collections.

Among those featured will be Ann and Joseph Hall, former slaves who gained their freedom with assistance from Junius Brutus Booth (John Wilkes Booth’s father) and later lived with the Booth Family; Sam Archer, a freedom seeker enslaved by the Bel Air family of Thomas Hays; Harriet Cole Baker, a self-educated, pioneering evangelist; Margaret Morgan, whose heartbreaking story became a national tragedy with the Supreme Court’s 1842 ruling in Prigg v. Pennsylvania; Elisha Tyson, a Maryland abolitionist; Freeborn Garrettson, a minister who freed his slaves and parceled his land to them; and William Still, whose 1872 book, “The Underground Railroad A Record of Facts, Authentic Narratives, Letters…” documents many freedom seekers from Harford County and the surrounding area.

Also part of the project is a lecture, book and film discussion series which will examine the issues of freedom and slavery, which figured in the lives of the individuals featured in the exhibit and will draw upon fictional and non-fictional accounts of freedom seekers, Underground Railroad workers and abolitionists.

DeWolf and Morgan have written a book titled, “Gather at the Table: The Healing Journey of a Daughter of Slavery and a Son of the Slave Trade.” In their lecture, they will discuss ways that their story offers a model for healing in local communities. A book signing follows the lecture. The lecture and luncheon take place at 11:30 a.m. in the Student Center, Room 243. Seating is limited. To reserve a seat, please call 443-412-2224.

Also part of the “Faces of Freedom” initiative is “Gather at the Banks” on Saturday, May 10, 2014. A tree will be planted at the bank of the Susquehanna River to honor enslaved persons, freedom seekers, abolitionists and others from the region who, sought to end slavery. The names of freedom seekers and abolitionists will be read, a minister will bless their departed souls and descendents will pour libations for their ancestors. Spirituals and freedom songs will set the atmosphere. The Hays-Heighe House joins with the Hosanna School Museum in Darlington in organizing the gathering.

“Our hope is that ‘Faces of Freedom’ provides forums for frank, honest and respectful dialogue and critical thinking about freedom and slavery,” said Iris Leigh Barnes, coordinator of the Hays-Heighe House.

Funding for “Faces of Freedom” comes from the Maryland Humanities Council, National Endowment for the Humanities and Gilder Lehrman Institute. Other external partners include the Hosanna School Museum and the Historical Society of Harford County.

All events are open to the public and free of charge. For a complete list of events, visit harford.edu/community/hays-heighe-house.aspx. For more information, call 443-412-2495 or email HaysHeighe@harford.edu.