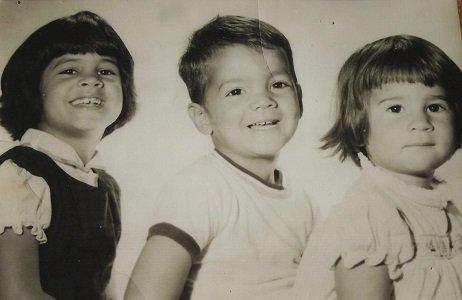 Martha S. Jones is a professor of history, law and Afro-American and African studies at the University of Michigan. She is writing a family memoir on mixed-race identity. L- R: Martha Jones, Paul M Jones, Jr., her brother; and Laura F. Jones, her sister c. 1964 or 1965 in Port Washington, New York. Courtesy Martha S. Jones

CNN — When the census listed Negro as a race option in 2010, a controversy erupted.

My students at the University of Michigan were eager to denounce the term's use: "Negro? It has to go!"

To their ears, "Negro" was derogatory, too close in tone to the other, more infamous n-word. I played devil's advocate, to test their thinking: "But some black elders still self-identify as Negroes." "It's preferable to its predecessor, colored."

"Don't some of you belong to the National Council of Negro Women chapter?"

I could not shake their thought.

I was confronting a generational divide. For my grandmother, "Negro" was a term of respect. To my students, it was an epithet.

It's no surprise that we feel unsettled when a new language of identity takes over the old. The language of race -- constructed variously in science, law, politics and culture -- has always been a moving target, and we aren't the first generation to confront it.

My CNN essay "Biracial and also black" generated a debate about the words we use to describe African-Americans. I called myself mixed-race, a phrase that includes identities rooted in multiple races.

Another term, biracial, some readers pointed out, assumes one identity borne out of two. It is, perhaps, too narrow for a discussion about identity in the 21st century.

Some readers also rejected the phrase "African-American," deeming it awkward and inaccurate. Renee wrote: "We are not from Africa, I was born here in the U.S. I don't know anyone there, can't even say my ancestors are from there."

Those who defended the use of African-American noted it was rooted in history, culture and personal choice. Others offered up alternatives, like "person of color," "black," "halfrican-American" and "mutt."

Words seem to fail us, even as they are all we have.

The debate from my essay illustrates how difficult it can be when we rely on linguistic conventions to express the complexity of human identities.

Even so, there are words that have fallen out of favor. No reader seriously proposed that I use a term like mulatto or quadroon instead of mixed-race.

In the 19th and early 20th centuries, these terms were widely used. Many of my paternal forebears were marked with an "M" or "Mu" for mulatto in census records.

Did they identify with this label? I cannot say for sure. But I do know that it was imposed upon them.

Until 1960, census enumerators chose the race. Someone had sized up my ancestors and decided they were mixed.

Among black Americans, ideas about the language of self-identification have changed over time.

In the early 19th century, black leaders also debated what names to give their religious and political organizations.

In the end they split. Churches adopted the term "African," as in the African Methodist Episcopal Church. Political organizations opted for "Colored," as in the Colored National Convention of 1848. And while we often refer to it as the NAACP, the nation's oldest civil rights organization has kept the word "colored" in its name long after it has left common parlance.

By the early 20th century, the term "Negro" gained traction.

The National Negro Business League was founded in 1900, and in 1914, Marcus Garvey founded the United Negro Improvement Association.

In 1971, the Congressional Black Caucus was formed. Its name suggested how the civil rights and black power movements left behind terms like African, colored and Negro.

I finally told my students a story, hoping they might see the generational dynamics that drive the language of race.

One afternoon, my paternal grandmother, Susie Jones, escorted nursery school children to a hospital clinic in her hometown of Greensboro, North Carolina.

When she approached the registration clerk she was asked her name. Her response: "My name is Mrs. Jones."

"We do not call Negroes by titles," the clerk shot back. My grandmother explained that she would be uncomfortable were the clerk to use her first name. "I will call you what you wish. I can't let you be more polite than I," the clerk conceded.

My grandmother was a black woman, the clerk was white, and it was the early 1950s.

The clerk used the term "Negro," and to this my grandmother did not object. For her, Negro was the preferred term. The alternative -- "colored" -- was demeaning.

But who was entitled to the honorific "Mrs."?

Both my grandmother and the clerk knew that to address a black woman by her first name was part of a racial etiquette reserved for white women with the status that "Mrs." conveyed.

My students could see how, like them, my grandmother had insisted upon her own self-definition even when others tried to apply different labels.

The lesson they took away was how, when we listen to others, we may learn how they prefer to be addressed, spoken of and categorized.

And that understanding is one step toward human dignity.

Martha S. Jones is a professor of history, law and Afro-American and African studies at the University of Michigan. She wrote a previous piece that explored her journey identifying as both biracial and black.