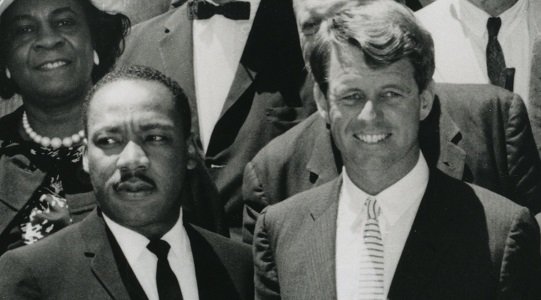 ATLANTA (CNN) — A judge in Georgia on Wednesday ordered the Rev. Martin Luther King Jr.'s Bible and Nobel Peace Prize to be stored in a safe deposit box that only the court will access until litigation over the items between the slain civil rights leader's children can be worked out.

Fulton County Superior Judge Robert McBurney ordered King's daughter, Bernice, to turn over the items but did not set a timeline.

The judge's order is the latest development in a feud between King's daughter and two sons -- Dexter King and Martin Luther King III -- over control of the Bible and Nobel Prize.

Bernice King alleges her brothers want to sell the objects.

The slain civil rights leader's estate -- controlled by his sons -- sued King's daughter to force her to turn over the items.

The judge ordered the items placed in a safe deposit box in the name of the King estate, but said only the court would hold the keys.

McBurney based his decision on "the likelihood the estate will show the Bible and peace prize are possessions of the estate." The items are "in a safe deposit box in an unknown location," the judge said.

They are among a longer list of items cited in an affidavit filed Tuesday by Martin Luther King III in the Superior Court of Fulton County, Georgia. It quotes from a June 18, 2007, e-mail from Bernice King entitled "Inventory" that divides the items potentially for sale to the National Center for Civil and Human Rights into four categories:

-- Items Bernice King would be willing to sell for the estate;

-- Items she would not be willing to sell, but might consider loaning, such as the Nobel Peace Prize and their father's Bible;

-- Items that have questions associated with them, including a Steuben glass bowl;

-- Items Bernice King wanted to see before deciding, including an Admiral color television.

Bernice King, who was 5 when her father was assassinated in 1968, is acting as the "gatekeeper" to her father's property, said attorney William Hill, who represents the King estate.

He said she has no individual claim to the property that belongs to the estate controlled by her brothers.

According to the complaint, King's heirs agreed in 1995 to give up their inheritance to the Estate of Martin Luther King Jr. Inc., but Bernice King has "secreted and sequestered" the items in question.

The estate wants the civil rights leader's 1964 Nobel Peace Prize and his traveling Bible, which was used by President Barack Obama when he was sworn in for his second term. The Bible used to be on display at the Martin Luther King Jr. Center for Nonviolent Social Change in Atlanta.

Bernice King has said her brothers told her on January 22 that they wanted the items so they could sell them.

Her attorney, Eric Barnum, argued in court that the items in question should be left in the custody of the King Center.

Barnum called the attempt to sell the items a "money grab," saying there's a history of the King sons taking money made from selling possessions to line their own pockets. He said Bernice King wasn't interested in selling "critical, sacred items," no matter the price.

The judge compared Bernice King's stance against the sale of her father's possessions to Coca-Cola not wanting to sell its secret soft drink recipe. He later noted he was not trivializing the value of King's possessions with the comparison.

This is not the first time the family has been at odds over King's legacy. Over the years, the siblings have sued and countersued one another.

Bernice King and Martin Luther King III sued Dexter King in 2008, accusing him of converting "substantial funds from the estate's financial account at Bank of America" for his own use. They agreed to a settlement, thereby avoiding a trial.