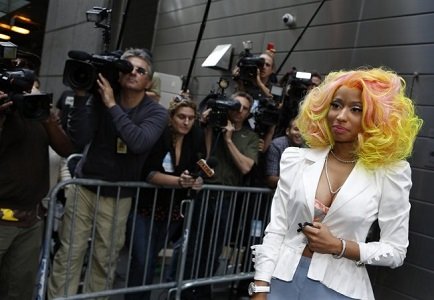 CNN — A hair stylist is accusing former "American Idol" judge and rapper Nicki Minaj of wigging out on a deal.

Terrence Davidson filed suit Friday in district court in Atlanta alleging that the star not only stole his wig designs, but also cost him a potential reality show deal that he was discouraged from pursuing.

According to the complaint, Davidson started working for Minaj -- whose real name is Onika Maraj -- as her hair stylist in January 2010. He says he began making wigs for her which she would then select for her appearances.

At the time Minaj was a burgeoning star who had steadily built her fan base by appearing as a guest rapper on mixed tapes and projects by her label mates at Young Money Entertainment. She quickly became known as the first lady of Young Money, which includes superstar rappers Drake and Lil Wayne.

The female rapper also became well known for her sense of style, including a multitude of wigs ranging from platinum blonde to pink. She poses in an ensemble which includes a pink wig on the cover of her platinum-selling debut album "Pink Friday," released in November 2010.

Both Davidson and his attorney, Christopher Chestnut, talked to CNN about his influence on crafting Minaj's image as well as the fact that the rapper now sells wigs on her site based on the designs Davidson says he created. The stylist said he discovered the wigs were being marketed and sold after someone sent him a picture and he began researching.

"I see these wigs online," said Davidson, who has also worked with others in the industry, including singers Patti LaBelle and rapper Remy Ma. "People are basically duplicating what I created for Nicki Minaj."

"Nicki Minaj is reaping great success and financial bounty reward for Terrence's creative expertise, and he is entitled to participate in that," Chestnut said. "Someone's got to stand up for the artist. We applaud the fact that she's making millions, but she's also got to pay bounty to those whose creative designs she's making millions off of."

In his suit, Davidson says he designed several wigs for Minaj, including the "Pink Upper Bun Wig," the "Fox Fur Wig," and the "Half Blonde-Half Pink Wig" that she wore in appearances, including the 2010 MTV Video Music Awards preshow. He says there were plans for he and Minaj to launch a wig line and discussions about a possible reality show.

But by 2012, the suit claims, "Minaj and her agents became mum about the business ventures and took active steps to isolate Mr. Davidson and preclude him from the notoriety he deserved for his wig designs."

"On its face you might think, what this guy is suing over wigs," Davidson's attorney Chestnut said. "But we really have to consider this in context. Hair is a multibillion-dollar industry, but moreover these are not your grandma's wigs. These are eclectic. They are decadent, and they are creative. This is about a brand that Terrence has built."

CNN has reached out to Minaj and her representatives for comment.