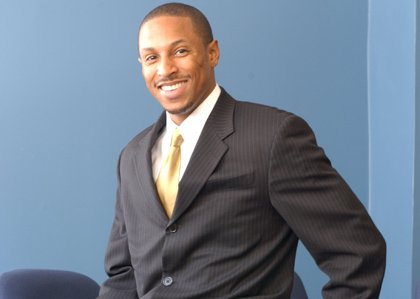 Jayfus Doswell is a history maker. In 2013, the Baltimore-born entrepreneur was featured on the HistoryMakers, the nation’s largest African American video oral history collection that has preserved the life stories of thousands of historic black figures, including President Barack Obama.

Doswell, who holds a Ph.D. from George Mason University, is the founder of Juxtopia, LLC and the Juxtopia Group, Inc., which specialize in human performance monitoring products and services.

Doswell comes from a family of entrepreneurs and says he has always been mystified and a little angry about the educational plight of minorities who are not always provided appropriate lessons in science, technology, engineering and math— fields that are commonly known as STEM.

The lack of qualified American STEM professionals in the workplace inspired him to use his Juxtopia Group to create change.

“We want to increase STEM proficiency in the workplace and in entrepreneurship for the underserved and the disadvantaged around the world,” said Doswell.

“It was expected that I’d be an entrepreneur. My mom was in education and my dad was in social work,” Doswell said. “I was pretty much programmed to make a change early on and I was given education early on, so given the faculties and early exposure and experience, I must give all the credit to my success to my parents.”

“My main motivation when I began mentoring came from an experience I had when I was rising up the corporate ladder,” said Doswell, who also was named among the “stars who make things happen in Greater Baltimore” by the Economic Alliance of Greater Baltimore. “I remember working at a company called CompuServe in Columbus, Ohio; and I remember realizing that there was a complete disparity in my industry.”

“The opportunity was there, but I didn’t see many other African Americans in my department so, not understanding the proper protocol, I sent an email to the president of CompuServe and my supervisor pulled me aside and said that wasn’t the way to go, it wasn’t protocol.”

Doswell says he still managed to secure a meeting with the company’s president but realized that he needed to create his own program for engineering and entrepreneur “superstars.”

Born in Charm City in 1979, Doswell spent his childhood learning various life lessons. He learned and played classical piano and the violin as a member of the Baltimore Youth Orchestra.

He graduated from Oberlin College in 1995 with Bachelor of Arts degrees in psychology and computer science. He presented his thesis at Williams College in Massachusetts and went on to earn a masters degree in systems and computer management from Howard University in 1998.

It was while completing his Ph.D. in information technology that Doswell

developed the idea for his Juxtopia companies, which has helped hundreds of young African-American entrepreneurs through the company’s Juxtopia Entrepreneur in Training (JET).

The company’s ambitious strategic plan is to develop young JET entrepreneurs who can build their own companies that each generate $1 billion in gross revenue.

“We want to have at least 1000 of our young entrepreneurs up and running simultaneously to secure a $1 trillion empire and that’s the strategic plan of our JUICE program,” Doswell said about his Juxtopia Urban Innovation and Cooperative Entrepreneurship— or JUICE— program.

Doswell’s successful strategies have garnered attention from various organizations and he has been a consultant for Lockheed Martin; Virtual Logic; TRW and the National Cancer Institute Center for Bioinformatics; CompuServe; the Maryland Medical Systems; and others.

“We’ve done a lot to get students motivated in high-tech areas, particularly in the STEM field,” Doswell said. “I enjoy training students and employ them to work on our products and be a part of our programs.”