Novel highlights role of African Americans during War of 1812 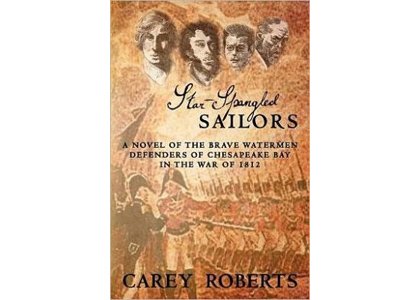 LEESBURG, Va. — Leesburg author Carey Robert’s newly released novel “Star-Spangled Sailors” paints a poignant picture of the War of 1812, emphasizing the pivotal role of young African American men during the War. The novel weaves together fiction and historical fact, paying special attention to the Chesapeake Flotilla and the men charged with defending the Chesapeake Bay during the War of 1814. The story highlights what Roberts calls a critical, but often forgotten about detail of the War.

“African Americans looking for freedom during the War of 1812 had few choices: fight for the British, an attractive choice, with offers of freedom in British territories in exchange for their services, or fight for the U.S., the very country denying them basic rights. A surprising number chose to fight for the U.S.,” says Roberts. “It’s a very little known fact not often discussed.” She says she discovered the information while doing research for another novel.

The discovery fascinated Roberts, and led to years of research with the hopes that Star-Spangled Sailors would be as historically accurate as possible. “It was absolutely fascinating to learn that these men were willing to fight for a country that didn’t allow them basic rights. Once I began my research, I couldn’t stop,” she said. “While much of the dialogue and a few of the characters were created, the events, the people, the actions, are all historically accurate and keeping with the time,” she says.

Against insurmountable odds, the Chesapeake Flotilla, made up mostly of young crabbers, oystermen, free and enslaved African Americans, not only saved the nation’s White House from burning, but also saved Baltimore during the Battle of Fort McHenry while under attack from the British. With the 200th anniversary of the Battle of Fort McHenry approaching this summer, Roberts says it’s important that this often forgotten about story be told.

“The very course of U.S. history could have taken a drastically different turn if it weren’t for these men, and I’m honored to have the chance to tell their story,” says Roberts.