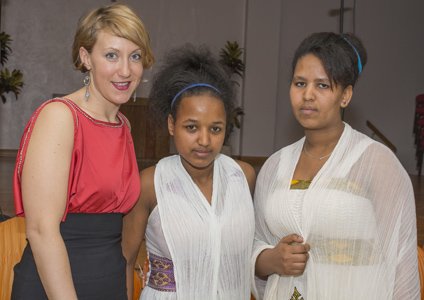 Kursten Pickup, coordinator of the Refugee Youth Project at BCCC; Kibret Bahre, a senior at Lansdowne High School and a participant in the program; and Koko Fitwi, Kibret’s cousin who accompanied her to the gala on Friday, February 21, 2014, at the Pennsylvania Avenue AME Zion Church in Baltimore. Tyrone R. Eaton

The event, "Culture Clash: A Celebration of International Fusion" featured live jazz, classical and world music put on by Musicians of Mercy, a collective of over 70 independent musicians and artists from the Baltimore metropolitan area committed to restoring hope and unity by partnering with local and international charities. The collective was formed in January 2010 after the devastating earthquake in Haiti.

Founded in 2003, the Refugee Youth Project is an after-school program for refugee youth from pre-K through the twelfth grade, which offers an environment for children from other countries an opportunity to enhance their literacy skills and knowledge of American culture.

RYP is a joint program of Baltimore City Community College and the International Rescue Committee. To date the program has served over 300 children with five site locations throughout Baltimore, including Pennsylvania Avenue AME Zion Church where the gala was held.

Kursten Pickup, coordinator at RYP for six years is committed to the mission of the program. “I’m most passionate about bridging the cultural divide as well as meeting and building a relationship with the families,” she said. “The relationships I have built are life changing because I feel I’ve learned more from them perhaps they have learned from me.”

Students who participate in this program have left their native countries with family members in hopes of seeking a better life in the United States. Often times, families in these circumstances left their countries due to dangerous political, religious or social issues. RYP serves students from more than 17 different countries, including: Bhutan, Burma, The Congo, Eritrea and Iraq.

Kibret Bahre, a senior at Lansdowne High School is very thankful for the program that helped her family adapt to American culture. “I like how they teach us about this country and people of other cultures. The volunteers are very helpful with teaching us how to communicate better with others.” Kibret came to the United States three years ago with her mother and two brothers from Eritrea, a country in East Africa.

The RYP is funded by a grant from the Office of Refugee Resettlement’s School Impact Grant. In addition, RYP has received donations from the Hyatt Regency Baltimore, Ripley’s Believe It or Not! as well as Baltimore Symphony Orchestra.

To learn more about the Refugee Youth Project visit: http://refugeeyouthproject.org/.