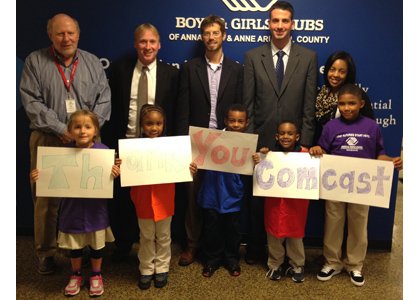 ANNAPOLIS — Comcast Foundation recently awarded the Boys & Girls Clubs of Annapolis and Anne Arundel County a grant totaling $20,000 to support the Club Tech program. Club Tech teaches technology skills through interactive projects and activities for Club members who participate in basic orientation that enables them to use technology and understand the basics of how computers work.

The Boys & Girls Clubs of Annapolis & Anne Arundel County (BGCAA) provides youth from the ages of five to eighteen with guidance-oriented character development programs conducted by trained, professional staff. Clubs reach out to kids who cannot afford, or may lack access to other community programs. The Clubs are open every day after school and during the summer, when kids have free time and need positive, productive outlets. Dues are low, averaging $20 per school year and less than $200 for a seven week summer camp. BGCAA’s six Clubs can be found throughout Annapolis and Anne Arundel County and serve more than 4,700 youth each year.

In addition to its support of the Boys & Girls Clubs of Annapolis and Anne Arundel County, the Comcast Foundation in 2013 donated nearly $17 million to nonprofit organizations across the country. Since 1999, the Foundation has awarded nearly $140 million to groups working to expand digital literacy, build tomorrow’s leaders and promote community service.

For these and other community efforts, Comcast recently was named to the Civic 50, a ranking by The National Conference on Citizenship (NCoC), Points of Light and Bloomberg News of the most community-minded S&P 500 companies in America.