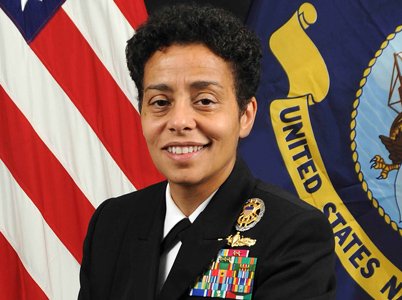 Vice Admiral Michelle Howard was confirmed by the Senate on December 20, 2013 as a four-star admiral and the vice chief of naval operations. She is the first female four-star admiral in the Navy’s 238-year history. Courtesy photo

The NAACP is proud to congratulate Michelle Janine Howard on her nomination by President Barack Obama for appointment to the rank of admiral and assignment as vice chief of naval operations. This appointment will make Howard the first female four-star Admiral.

“This is a historic and well-deserved appointment for Admiral Howard,” stated Roslyn M. Brock, chairman of the NAACP National Board of Directors. “Admiral Howard serves as a true inspiration for women, particularly women of color, in the military and across the nation. We look forward to her continued service to our country as a four-star admiral.”

On March 12, 1999, Howard became the first African American woman to command a ship in the U.S. Navy.

From May 2004 to September 2005, Howard was the commander of Amphibious Squadron Seven. Deploying with Expeditionary Strike Group (ESG) 5, operations included tsunami relief efforts in Indonesia and maritime security operations in the North Arabian Gulf.

Vice Admiral Howard is the recipient of several awards for her service. While serving on board Lexington, she received the secretary of the Navy/Navy League Captain Winifred Collins award in May 1987. Howard is also the recipient of the 2008 Women of Color Science Technology Engineering and Math (STEM) Career Achievement Award, the 2009 Dominion Power Strong Men and Women Excellence in Leadership Award, and the 2011 USO Military Woman of the Year.